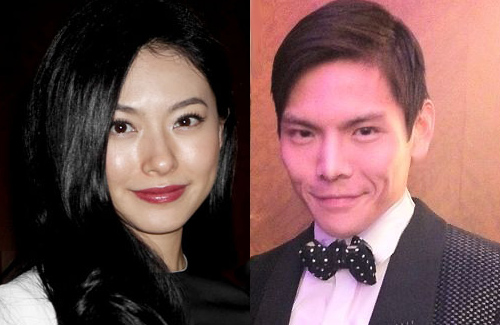 Since their love sparked in 2009, Race Wong (黃婉佩) and Jacky Heung (向佐) went through numerous obstacles to be together.  It was reported that Race put an extensive amount of effort to please Jacky’s mother, Mrs. Heung.  Although Race had succeeded in satisfying Mrs. Heung, their relationship still ended due to Race’s wish for marriage.

A member of music group, 2R, Race Wong met Jacky Heung, son of film producer Charles Heung (向華強) while learning Japanese in 2009.  At that time, Race was still in the midst of divorcing her ex-husband in Singapore, Chan Ching Kai (陳靖諧).  Due to her unclear marital status, Jacky’s mother, Mrs. Heung did not acknowledge Race as Jacky’s girlfriend and indicated to the media that they were just friends.  Mrs. Heung held a tough stance and emphasized, “Being clear of one’s status is critical!”

In order to please Mrs. Heung, Race quickly proceeded with her divorce with Chan Ching Kai.  Soon after, she enrolled in business school, hoping to provide a fresh image. In recent years, under the arrangement of Mrs. Heung, Race has been working at a securities company.  With the efforts made by Race, she slowly gained Mrs. Heung’s acceptance.

As Race is turning 30 years old next month, she has reportedly started to pressure Jacky into marrying her.  It was rumored that this caused animosity in their relationship.

An insider revealed that Race had hoped for marriage. Race’s sister and 2R member, Rosanne Wong (黃婉君) got married in 2009. Seeing Rosanne’s happy marriage and the birth of her baby, Dylan, Race wished for the same happiness.  Because of this, she had pressured 27-year-old Jacky to marry her.

However, Mrs. Heung had alternate plans for her son.  She hoped for him to focus on his filming career.  Two years ago, Mrs. Heung set out a 10-year plan for Jacky, which did not allow for her beloved son to marry within those years!

Jacky Breaks Up With Race

Not wishing to get married, Jacky painfully broke up with Race.  Despite Race’s pleas, Jacky was determined to end the relationship. Rumors arose that Jacky was too young for marriage and that he respected his mother’s wish to focus on his filming career.

Publicly, Jacky even changed his status on Facebook from “stabled relationship” to “single”.

37 comments to Race Wong Devastated Over Breakup With Jacky Heung