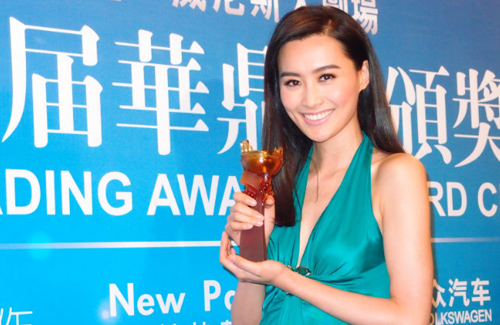 Raymond Lam (林峯) and Fala Chen (陳法拉) were named China’s favorite TV actors at the 10th Huading Awards <華鼎獎>. Known as a reliable measure of popularity, the Huading Awards gives out top honors in the films, television, and music categories based on public opinion surveys. This year’s event, which took place on October 7 at the Venetian Macao, also recognized global artists and attracted celebrities from Japan, South Korea, and the United States.

As for their domestic counterparts, Dante Lam (林超賢) picked up the award for China’s Best Director for Unbeatable <激戰> while star Nick Cheung (張家輝) won the title of China’s Best Film Actor. When asked to comment, Nick said, “I’m very happy. This award acknowledges my popularity this year, so I feel very honored. Many people feel that I have done well in recent years. Actually I have worked just as hard before, but I have since worked with different directors and was able to bring out my skills in different ways.”

Zhang Ziyi (章子怡) was crowned China’s Best Film Actress despite her absence at the award ceremony. She later explained that she was unable to attend because she is currently busy filming a new John Woo (吳宇森) movie.

Hong Kong artists Raymond Lam and Fala Chen are China’s TV King and TV Queen this year. When asked to comment on his win, Raymond said, “I was given many opportunities to film in mainland this year. I hope that, after winning this award, viewers will continue to witness my efforts in the future.” Asked if girlfriend Karena Ng (吳千語) is his good luck charm, Raymond dodged the discussion by saying that he feels very lucky and grateful that viewers continue to support great series.

Fala, who quickly gained popularity due to her role in this summer’s hit Triumph in the Skies 2 <衝上雲霄II> , said that she is very happy about her win. She added that winning TV Queen is a big encouragement and that she aims to perform even better in the future.

Anthony Wong (黃秋生) was also recognized for his efforts in this summer’s stage play 18/F Flat C <十八樓C座>, taking home the title of China’s Best Stage Actor. When asked for his reaction, Anthony jokingly shared that he was nervous and had an urgent need to use the restroom while he waited to receive his award. He added, “I’ve just established my own theater company, so [this award] helps. I also received the award from Zhao Benshan (趙本山). It was very meaningful.”