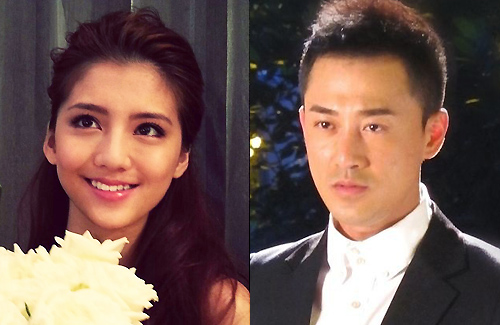 With Lunar New Year just a few days away, Raymond Lam (林峯) is reported to bring rumored girlfriend, Karena Ng (吳千語), to his hometown, Xiamen, to meet his parents with intentions of a flash wedding. The latest rumors made Raymond laugh and shake his head in disbelief.

In the last three weeks, Hong Kong tabloids have been diligent in reporting the “developing relationship” between Raymond and Karena. The pair were reportedly partially living together, with Raymond willing to pay for Karena’s entire family’s living expenses. Raymond’s father, Lam Kwok Wah (林國華), allegedly did not like Karena and regarded her as a gold digger. Raymond had allegedly hoped to force his father to accept Karena by hinting that he may retire from the entertainment industry and focus on managing the family business.

In a radio interview, Raymond denied all the recent rumors and said, “I normally will just laugh over the rumors. However, if the rumors involve my family, then they are no longer funny. None of the rumors are true.”

Raymond also explained that the “BB” he referred in his JSG Most Popular Male Singer Award acceptance speech was his younger sister’s baby, instead of the popular speculation that he was thanking Karena.

When prompted about rumors of a flash wedding with Karena, Raymond’s face blushed and he said, “The news is becoming so far-fetched. Please don’t tug me into this because of Ekin Cheng (鄭伊健) and Yoyo Mung’s (蒙嘉慧) recent wedding!”