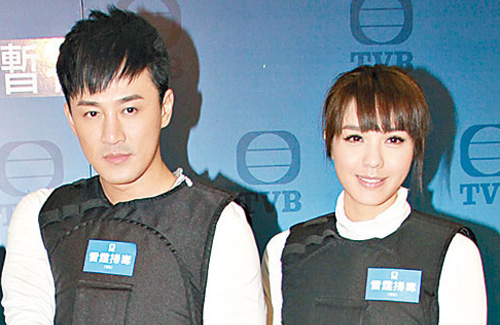 It has been 6 years since Ella Koon has filmed a TVB drama.  Taking extreme caution to avoid past rumored boyfriend, Ron Ng (吳卓羲), did Ella screen the cast list to avoid further cooperation with him? Evading the issue, Ella said, “My company will do the necessary selection. I am very happy to be able to work with Raymond Lam this time. When my female friends heard that I will be working with Raymond, they all screamed! I will fully enjoy my romance with Raymond for the next 3 months!” Revealing that she will harbor a secret crush on Raymond in Fight Crime, Ella noted that she will not have any kissing scenes with him.

Kate Tsui will not portray a police officer in Fight Crime, instead playing a pregnant “Drug Queen” treading in gray boundaries. Kate will be involved in a love triangle with Raymond Lam and Ella Koon. To prepare for her role, Kate indicated that she will need to learn how to play drinking games (猜枚) and speak trendy slang words.

Portraying a police officer for the first time, Raymond Lam revealed that he will go back to Xiamen to visit his family for Lunar New Year. After the holiday, Raymond will strengthen his physique. Raymond said confidently, “I have a lot of flesh on my body; it’s very easy to mold it into muscle!”  Serving as a host for TVB8 in the past, Raymond had interviewed numerous celebrities, including Fight Crime costar, Elaine Ng. However, Elaine did not recall being interviewed by Raymond in the past.

Asked how TVB was able to persuade her to participate in Fight Crime, Elaine said that the 30 episode format will allow the full drama flavor to flourish. In addition, handsome costar, Michael Miu, also attracted her. Elaine revealed that she and Michael will portray a divorced couple, thus they will not have any kissing scenes. Jayne: In the sales presentation clip, Kate shared a kiss with Michael Miu, who was apparently the drug lord. Perhaps they will keep the same plot in place. Kate’s role as a pregnant “Drug Queen” looks quite interesting.

Perhaps Raymond Lam will have some showering scenes at the police station, thus the need to flex his muscles to good use?