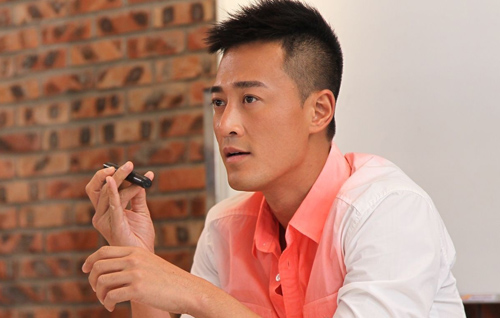 Raymond Lam’s (林峯 ) 2001 TVB series, A Taste of Love <美味情緣> was recently re-run in Hong Kong. Raymond was a young and very green actor in the drama. Fast forward a decade later, Raymond is now TVB’s favorite leading actor and he is loved by many of his fans. Recently, Raymond did not want to limit himself to filming only TV series, and he has been working hard to pursue a movie career.  He admitted his ultimate goal is to become the best movie actor. Raymond Lam is very grateful to producer Wong Bak Ming (黃百鳴), who encouraged and motivated Raymond to drop all his worries and focus on pursuing his movie career.

The new comedy movie, Love is… Pajamas <男人如衣服>, starring Raymond Lam, Ronald Cheng (鄭中基), and Teresa Mo (毛舜筠) was released on October 11 in theaters. Raymond portrays a happy-go-lucky photographer, a marked difference from his usual handsome gentleman roles. Filming a comedy for the first time was a very challenging experience for him, in which the most difficult part was establishing the right rhythm and immediate reactions. Raymond believes it is a lot easier to make the viewers cry than laugh. Timing is so important because even a slightly delayed reaction will ruin the joke.

In addition, comedic timing is very important. The first time a joke is told, people may find it funny, the second time around less so. The challenge is to make it funny as the joke is told over and over again. Raymond was very fortunate to work with the two veteran comedy actors, Ronald Cheng and Teresa Mo. He did not need to worry too much as long he did his part. It was quite exciting during filming because the two great actors gave him a great amount of advice.

Raymond said he feels so lucky to collaborate with many different artists, including Lo Hoi Pang (盧海鵬) and Benz Hui (許紹雄), who are gifted comedy actors that inspired Raymond’s interest in comedy. Raymond also said he found the right chemistry with Ronald Cheng immediately.

During the last few years, Raymond established a very solid position in television. In the last year, he has been focusing on his movie career, and feels deep satisfaction from filming movies. Filming TV series prevents the actors from deeply immersing into the characters since the actors have to act according to the script.  In his first movie debut, Stolen Love <別戀>, Raymond discovered that filming movies allows him to transform into many different characters, allowing him different exploration avenues. Raymond feels there are still many things for him to learn in performing in films.

Raymond treasured working with famous producer and director, Chui Bo Chu (崔寶珠)  and Tony Ching (程小東). He looks forward to working with different types of actors in the future and different ways to play a character.

Goal is to Become Movie King

Raymond said his movie career is only in the beginning stage, and he has not pitched in 100 percent effort in filming movies yet. He still lacks the experience in filming movies. When asked whether Raymond will be like famous actor, Louis Koo (古天樂) who gave up his TV career to make movies, Raymond said that he will miss TV viewers, because they have watched many of his series and faithfully following his TV career. He will definitely miss working with the TV casts and crews.  If Raymond has to choose to focus his time and energy on his movie career, he may only film one series per year, but he will be selective in choosing his role in TV dramas.

Raymond is very thankful that Wong Bak Ming told him he is very fitting for the film industry. He had his doubts in the beginning, but Wong’s encouragement and kind words have motivated him to confirm his decision. When asked whether his goal is to become a movie king, Raymond said that goal seems very distant but that would be the ultimate goal. Even in any other profession, everyone wishes to be at the top of the field.

Recently, the Hong Kong movie industry is making a strong revival like its golden years in the 1990s. Raymond is glad to see that the popularity of Hong Kong movies is on the rise again. During the last few years, he has been hoping that directors and producers are able to make higher quality Hong Kong movies and finally they have done the job.

There has been many rumors and gossip about Raymond’s romantic life, such as the Mavis Pan’s (潘霜霜 ) incident, and the rumor that  he may be dating his Love is…Pyjamas costar, Karena Ng (吳千語). As for dating again, Raymond said honestly,”I really want to, and don’t be so surprised if everyone sees me dating again. Each individual has their own personal life, and the Hollywood actors have no problem doing so, as long they are doing well in their jobs and are keeping their love life in check.”

As for finding a companion, Raymond’s goal is find a suitable wife. However, he does not have the time to find the right person. He hopes he can fully enjoy and experience the finer points of a relationship. Raymond said he will treasure love, which is very special for him.

As for whether Raymond will reveal his future relationships to the public, he will probably not make a point to do so. Raymond also said it is difficult for artists not to sacrifice love for their career. They have to channel all their energy to the job and sacrifice personal space, while yearning for the media to give them some space and show mutual respect to each other.