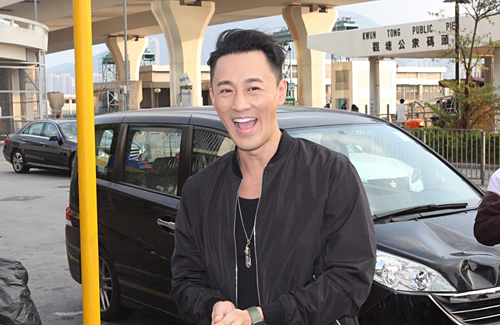 Filming is currently under way for Line Walker 3 <使徒行者3), and Raymond Lam (林峯) was seen filming a scene where he was stabbed by a knife and then hit by a car in his haste to escape. A stunt double helped fill in for the collision with the car, and afterward Raymond stepped in for close-up shots while lying in a pool of blood.

During break, Raymond was surrounded by reporters congratulating him on his recent engagement to 29-year-old Chinese model Carina Zhang (張馨月). Raymond was in a great mood and smiled widely the entire day. Reporters asked him whether he would return to Xiamen to discuss wedding plans with his father, in which he declined to comment.

Filming was smooth sailing. After two or three shots, Raymond was done for the day. Media continued to ask about wedding plans but he was tight lipped and teased, “You’ll find out later!”