By stella on September 3, 2012 in NEWS, Star Interviews 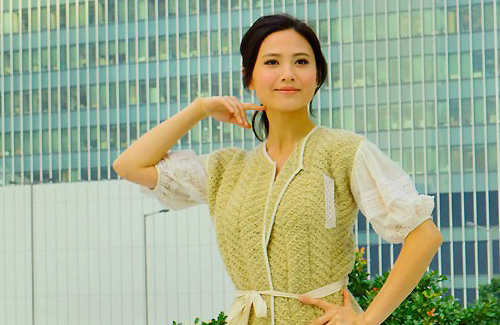 It seemed like a glamorous moment for Rebecca Zhu (朱晨麗) when she was crowned Miss Hong Kong last year. However, behind the glittering title, Rebecca has an untold story of struggling through hardships before winning the pageant and attaining fame.

When Rebecca first arrived in Hong Kong eight years ago, she did not understand nor speak a single word of Cantonese. It was a woman’s remark that motivated her to learn her Cantonese well. “I remembered there was a time when I went to the wet market. I wanted to tell the woman, ‘Can you give me a plastic bag?’ However, she could not understand my words. The woman then replied fiercely to me, ‘What are you talking about?’ This incident pushed me to master my Cantonese. I kept watching Cantonese dramas. I have to thank that woman. If it were not for her, I will still be speaking Mandarin now!”

Endures Poverty for Her Passion

When Rebecca was 16 years old, she left Jiangsu, China to learn ballet dancing at The Hong Kong Academy of Performing Arts. Without much financial support from her parents, Rebecca had to carefully budget her money, even sacrificing meals to make ends meet.

Recalling those difficult times, Rebecca said, “A proper meal will cost regular price, as compared to an afternoon tea which is half the price of a meal. Thus, I will do away with dinner and just have my afternoon tea. The worst is when I do not bear to part my money on transportation fees. I lived in Hong Kong Island and I had even tried to walk from my apartment to the Academy. It took half an hour. If I did not walk, I would choose taking the tram instead of a bus. I never thought of taking a taxi.”

Each day, Rebecca would keep track of her daily expenses in a notebook. She would also calculate how much money she had remaining after a month, and reworked her meal allowance accordingly.

After graduating four years ago from The Hong Kong Academy of Performing Arts, Rebecca was recruited by the Hong Kong Ballet. Although she did not earn much money as a ballet performer, Rebecca did not mind the difficult times to realize her dancing ambition. However, the intensive rehearsals and performances started to take a toll on her health.

After Rebecca had an appendix surgery, it was not long before she suffered from a hamstring injury. Recalling her depressed moment, Rebecca said, “I suddenly felt that after dancing for over ten years, it should be sufficient already. When a dancer gets onstage, you need to complete your performance even if your leg is bleeding or your bones have broken. You need to be responsible to the audience that bought tickets to watch your performance. When I thought of it, I felt that life was so difficult. Thus, I made up my mind to quit my job and look for things that I wanted to do!”

Wishing to try something new, Rebecca plucked up her courage to join the 2011 Miss Hong Kong pageant. She only informed her parents after she enrolled. Her mother initially had supported her decision. When Rebecca revealed that she needed to wear a swimsuit in the competition, her mother wanted Rebecca to withdraw from the pageant. After several discussions with her mother, Rebecca finally received Mrs. Zhu’s support.

“To be honest, how many ten years do we have in life? Therefore, we need to try all sorts of things. When you look back, you will know that you did not waste your life at all!”

Rebecca Wants to Be a Career Woman

After suffering from early setbacks in life, Rebecca finally found her proud moment when she was crowned Miss Hong Kong last year, which allowed her to forge a career in the entertainment industry.

When asked why she had more perseverance than others, Rebecca replied, “When you are in a foreign land, you need to blend in and learn how to survive. If you do not take care of yourself, nobody can help you. There are many career women in this generation that know how to earn money to take care of themselves. I hope to become one of them too!”

At a tender age, Rebecca has been separated from her parents. When she was 10 years old, she went to Shanghai to study. She hopes that one day she will earn enough money to allow her family to live in Hong Kong. “Although I am already used to not being with my family, I really miss them. I hope that when my life is more stable, I can earn more money to buy an apartment and bring them to live with me!”