Review: “Queens of Diamonds and Hearts” (By H) 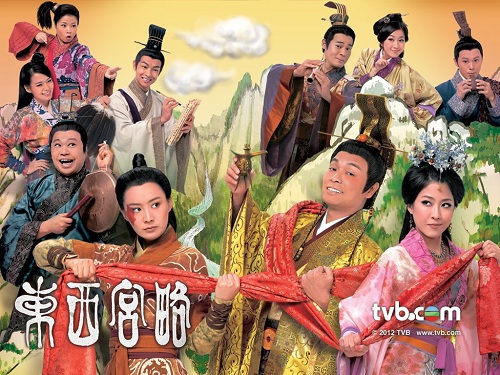 King Chai Suen (Roger Kwok) is the incompetent ruler of the State of Qi. A stroke of fate brings the King to meet Chung Mo Yim (Fala Chen), a smart, skilled and strategic woman. However, she was born with a hideous birth mark on her face and the King finds it revolting. Due to a promise made, the King is forced to make Mo Yim his wife despite his own unwillingness to do so.

Initially, the marriages went well as Mo Yim deals with the State’s affairs and problems, while the King spends time with the beautiful Ying Chun. Howeve,r tensions rise as the King slowly develops a liking for Mo Yim after she rescues him countless times. The result is Ying Chun’s jealously, which makes her an easy tool to those who wish to kill the King.

Theme Song: Fala Chen is not a bad singer!

Commentary regarding the early, middle, and ending episodes are below:

Early Episodes: At first I did o’t realize it was a comedy but once I started the first episode, I knew right away. The first few episodes were actually quite uneventful and the humour that was used was not too engaging or funny. With the characters, viewers can see that Ying Chun is a very naïve and innocent girl with a terrible past. She was a likable character in the beginning but her stupidity (or rather ignorance) allowed her to be fooled by the lies her family told about Mo Yim. This made her jealous and caused her dislike Mo Yim. This is probably the first time Sharon Chan had a lead role (or one of them) in a drama but the character itself is pretty shallow and does not stir much emotion.

Playing the King, Roger Kwok was back to his old silly self and played his role accordingly. I have no other comment.

Fala Chen is convincing when it comes to being a rough person from the “mountains” but her birthmark just doesn’t seem that ugly! Past actresses that played Chung Mo Yim were a lot uglier! I don’t think Fala looks that natural in ancient dramas. She looks better in modern ones.

To be honest, there’s not much to comment on in the first few episodes.

The Middle Episodes/Rising Action: When Mo Yim started to like the King and vice versa, that’s where things got interesting. The plot quickened as well as the humour! I chuckled a few times as I watched the rising action of the story. One of the funniest and unique twists in the drama was when the King and Mo Yim switched souls! It was strange, yet fun to watch and kudos to the writer for adding it in! Then, when I thought that they would switch back their souls, something else happened…which I won’t ruin for you!

Now behind all this, Lord Shun Yeung Kwan (Ben Wong) is plotting something evil! Well needless to say, he was planning to take the throne! Just like most ancient costume dramas, someone wants to be king. In the midst of all the humor among the other characters, Ben plans to usurp the throne.

This is where I got really frustrated.

How can the characters be so stupid? I know it’ll make the story fit together perfectly if they’re that stupid but it just makes me want to yell in frustration! Come on! I rather have a longer series than have a forced storyline! Sometimes I feel that TVB just rushes its dramas too much. I mean, many of China’s dramas are 50+ episodes long! Maybe it’s the fast and quick lifestyle of Hong Kong. Acting wise, I really enjoyed watching Fala and her comedic side! When she was acting as the King, it was really good and funny to watch! I think she did well in a comedy series! Some over-attempts to be funny but in a comedic, light hearted drama like this, I think it wasn’t too bad.

For Sharon (Ying Chun), I think she didn’t have enough scenes with opportunities for her to “shine.” But I think she mastered the “cooing” when she is trying to seduce the King. I’m glad she got one of the main roles because normally she is a supporting character even though she’s been with TVB for a decade already.

As for Roger, I think he did a good job in this drama.

Supporting characters played by actors/actresses such as Oscar Leung, Louis Yuen, Yoyo Chen, Koni Lui and Raymond Cho weren’t bad. Oscar, Louis and Koni were amusing, Raymond was a bit emotionless and Yoyo was a bit over-dramatic. But maybe she did that to be funnier. The “climax” or the most exciting part of the drama was just not very exciting; typical and anti-climatic. I think that it was supposed to be really “thrilling” when the King was about to get killed. But then the writers used the same trick again (switching souls) and then you realize how dumb the whole thing is.

The fall of the villain was terrible as well. Yes, his trusted one betrayed him and in the end, he became a crazy person who thinks he’s the king. Sounds a lot like Beyond the Realm of Conscience and The Life and Times of a Sentinel. Seriously, TVB has to kill some of its villains! Give the bad guys what they deserve!

BUT it IS a comedy so of course there is a happy ending! If you are a person who hates tragic endings, you are in for a treat.

In the last few episodes, I don’t really see much stand-outs in the acting, so I would have to say that the end wasn’t really as intense as I wanted it to be.

Other Things:  I’ve read that many think that Sharon should have played Mo Yim instead and that they should have switched roles. In my opinion, I believe that Sharon was good for the role as she had to be slightly evil and be able to look desirable. With Fala, I just can’t see her be someone fragile yet “evil.” Sharon can be rough and tough, but I don’t think she’ll look as good as Fala when doing fighting scenes or comedic scenes.

However, I don’t think that Ying Chun was evil enough. She could have been so much more evil if she wasn’t so ignorant and oblivious of her surroundings.

If Mo Yim’s Master is even capable of switching souls, why can’t she simply make Mo Yim’s birthmark disappear? That’s something I don’t understand. But I like how they made the relation that the birthmark looks like the map of Qi so she is destined to help the king. That was creative. I’ve never seen the Princess in another drama before. I thought she was cute and I hope to see her more!

It was a simple and cheerful drama. Doesn’t have a really clear objective and it’s plainly there for fast, short-term entertainment. The beginning and end were disappointing the humour and plot in the middle saves it. Ratings for the finale were a bit high and I think that the ratings in the middle of the series could have been higher. That’s all!

This review was written by H, a Contributing Writer at JayneStars.com.

21 comments to Review: “Queens of Diamonds and Hearts” (By H)