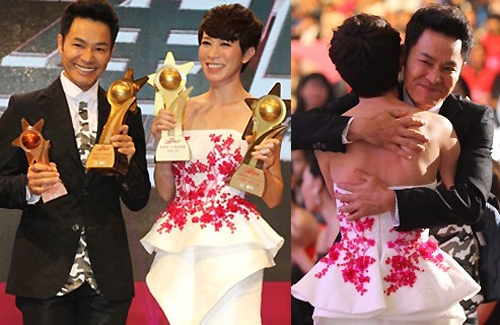 Three-time TV King, Roger Kwok, is grateful towards TVB for casting him in Black Heart White Soul, which allowed him to push his own acting limits.  Moved by the overwhelming response the drama generated, Roger said in his acceptance speech, “When I returned to TVB and my colleagues came up to praise my performance, I went to the restroom to cry each time. I was crying tears of happiness.” He also praised his co-stars Kristal Tin (田蕊妮) and Louis Cheung (張繼聰) for their fine performances in the drama.

Thanking Malaysian viewers for their support over the years, Roger said, “I’m very happy that my dramas were broadcast while you were growing up! If I had a bit of an impact, I’m already very honored! No matter what award I receive, I will greatly cherish it!”

Although it has been two years since Charmaine Sheh’s  TVB dramas were aired on screen, Line Walker quickly boosted Charmaine’s popularity back to the top. Thanking fans for their votes, Charmaine pointed out that filming Line Walker was a difficult, but rewarding experience. “We encountered many challenges, with some cast members getting injured and not feeling well on set. But we did not complain and were very united.”

Ruco Chan (陳展鵬) scored a double victory for romantic comedy Outbound Love <單戀雙城>, which was filmed partially in Malaysia. He received My Favorite Character and My Favorite Onscreen Couple awards for the drama. However, co-star Aimee Chan (陳茵媺) was unable to attend due to her second pregnancy. Ruco hopes to be able to continue delighting viewers with different roles and to be able to film another drama in Malaysia.

Appearing as a special guest presenter at the ceremony, Andy Lau (劉德華) gave the TVB Star Achievement awards to Lau Kong (劉江) and Helena Law (羅蘭). Over their prolific 40-year acting careers, the veteran artistes appeared in many dramas and mentored younger artistes with their experience. Lau Kong and Helena were grateful for the recognition and thanked both TVB and Astro.

Complete results of the of the TVB Star Awards Malaysia 2014:

My Favorite Most Improved Actor
Sammy Sum for Line Walker

My Favorite Most Improved Actress
Samantha Ko for Line Walker

My Favorite Informational TV Program
Wellness On The Go 2