Joel Chan (陳山聰) revealed Ron was already wearing a Rolex Daytona circa 2004 when they were filming Twin of Brothers <大唐雙龍傳> together. Meanwhile, Joel was still wearing a plastic watch at the time. “His watch has probably appreciated to around $300,000 Hong Kong dollars. It was only a few thousand when he first bought it,” Joel said.

However, Ron did not think of his purchase as an investment then. “I just bought the style that I like; I love the three circles on the Daytona. Of course, it’s a good thing that it appreciates. Maybe men have a particular interest in watches; they want to own at least one [Rolex].”

Lawrence chimed in and said that he also likes Rolex, and he has about 40 Rolex watches at home. However, what shocked guests was not Lawrence’s amassment of watches but Ron’s seven cars. “My cars also appreciated given that some models are over 20 years old. I know the prices are still rising for some of them,” he shared. “Aside from money, you also need to be qualified to buy one. Some are limited edition, so they won’t always sell it to you.” 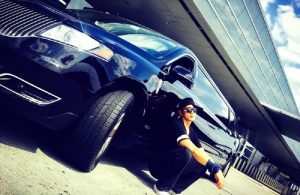 Ron believes that his love for cars is equivalent to an owner’s love for their dog. He would often take his cars for a drive like one would walk a dog. “If I don’t have anything to do, I will go for a drive in each of my cars, as I’m afraid they will not run one day,” Ron shared. “I like to go at a fast pace, but if the speed limit is 100, I will oblige and drive fast within a safe range.”

Hearing this, Bob replied, “It really is like you’re walking a dog.”

Ron explained, “All my interests lie in cars. I rarely go for walks. I am either at home or in the car. I also really enjoy the interiors of my cars.”

Christine laughed and commented, “You don’t have feet.”

In addition to spending his wealth on cars, Ron has also been investing in real estate. In 2013, he bought a 1,200-square-foot apartment, valued at HK$9 million, for his mother as a gift. Currently, the apartment value has increased to HK$17 million.

The actor also has another unit that he rents out, and he reportedly paid off the mortgage within three years. With his net worth estimated to be around $50 million Hong Kong dollars, it’s no surprise that Ron has previously mentioned that he is looking to purchase a third property.

Although Ron is doing well career-wise and financially, his love life is still a blank page. Even so, the bachelor is leaving romance up to faith. He expressed happiness for good friend Kenneth Ma‘s (馬國明) new relationship with Roxanne Tong (湯洛雯). As for Bosco, who allegedly attempted to pursue Jennifer Yu (余香凝), the good friend of Bosco’s rumored girlfriend Rose Chan (陳嘉桓), Ron defended Bosco. He said, “He already responded. I believe him, and it is just a rumor. After filming, he immediately goes to work at his oyster bar, so I doubt he has the time.”