While Rosina Lam (林夏薇) and husband Jason Mok (莫贊生) have been trying for a baby with little luck, the actress recently turned her attention to her cousin Raymond Lam’s (林峯) daughter. As the cousins have always been very close, Rosina is very excited about the baby’s arrival and was seen dropping thousands of dollars (HKD) during a shopping trip.

Married for five years, Rosina initially took a step back from her acting career and hoped to concentrate on building her own family. She did not renew her contract with TVB as the station is notorious for overworking their artistes, and instead signed with Shaw Brothers last year. Despite many attempts, the actress has not been able to conceive successfully. 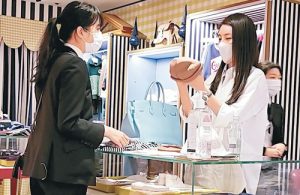 This did not dampen Rosina’s excitement over the birth of Raymond’s newborn daughter, especially her eagerness to lavish many gifts on the baby. Wearing her eight-carat diamond ring and carrying a designer purse, Rosina busily swiped her black card throughout a recent shopping trip. The actress’ hefty shopping bill quietly put to rest earlier rumors that her husband was struggling with financial debts.

When asked if she was shopping for Raymond’s daughter, Rosina laughed and admitted she bought gifts for the baby. However, she has been unable to visit Raymond’s family because of the pandemic and has seen the baby only through photos and videos. “It’s sad because I don’t know when I’ll be able to see her. I may have to wait until she is one year old! I [bought things] to allow for bigger sizes. I’m just buying things as I go.”

When asked if she is ready to become a mother after the birth of Raymond’s daughter, Rosina said, “You can’t get something just because you want it. I’m letting things happen naturally–I don’t want to put too much pressure on myself.”

Rosina Lin and Husband, Jason Mok, Are Having Financial Issues?