Ruco Chan and Phoebe Sin Reportedly Moving In Together 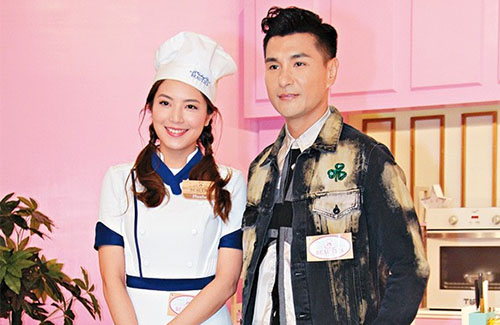 It appears that Ruco Chan (陳展鵬) and Phoebe Sin (單文柔) are close to sealing the deal.

In March 2017, 41-year-old Ruco Chan and 28-year-old Phoebe Sin were warped into a dating scandal. Although the couple never confirmed it, their relationship is an open secret among gossip circles. Supported by netizens and fans, Ruco and Phoebe are becoming more open about their relationship.

The two have attended events together, and in a previous interview, Ruco even shared that he has always wanted to get married. He told reporters, “Don’t be surprised if it happens tomorrow!”

And it does look like that’s coming sooner than expected. According to a new tabloid report, the couple were spotted looking at new apartments, indicating their intentions to move in together.

A few days ago, Ruco and Phoebe were seen checking out a new unit in Marina Cove, which is known for being the celebrity apartment complex. It houses celebrities such as Alex Fong Chung-sun (方中信), Roger Kwok (郭晉安), and Tony Hung (洪永城). An hour later, the couple went over to look at another unit in The Mediterranean in Sai Kung.

According to a real estate agent who had served the couple, Ruco and Phoebe were indeed trying to shop for an apartment that day. “[Ruco] did come by himself once. This was his second time.” The agent added, “[Ruco] has been looking at a lot of new apartments in Sai Kung. Maybe he wants to get married soon.”