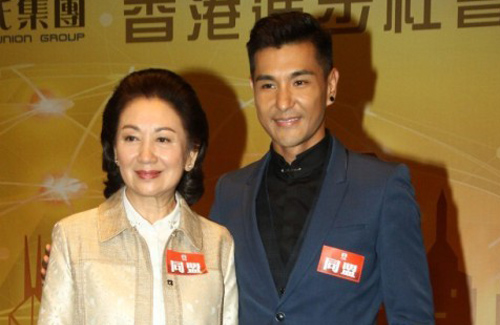 Despite TVB’s notorious long and tedious working hours, Paw Hee Ching was quick to adapt to the filming requirements. “I’m used to it now. The feeling [during filming] is very intimate. I know a lot of the actors and saw many old friends. The producer is also very nice to me. He knows that I am not used to portraying strong and tough characters, so he gives me pointers on the side. [Portraying the character] made me feel like I turned into someone different!”

Ruco, who has worked with Paw Hee Ching in the past at ATV, expressed his excitement and nostalgia in being able to collaborate once again. “We haven’t worked together in a long time. I am very excited about Paw Hee Ching’s character. To her, it is a very big challenge. No one has seen her [portray this type of character] before.”

With the success of A Fist Within Four Walls  <城寨英雄> and Ruco’s skyrocketing popularity, there has been a lot of hype surrounding Ruco’s chances of winning TV King this year. A recent report claimed that the 39-year-old actor is negotiating his contract terms with TVB, hoping to extend his contract in exchange for the big award. Ruco joked, “It depends on how long the contract is, but I’d be willing!” Jokes aside, Ruco later added, “That’s great if it were the case. Similar to the Miss Hong Kong and Mr. Hong Kong pageants, the voting system is very public and very fair. There are always news reports like this, but it has never happened to me before. If I won the award under fair and just circumstances, then I would very happy.”

Paw Hee Ching, who stars as Ruco’s mother in the upcoming drama, expressed her support for him.  “Ruco’s improvements can be witnessed by everyone. He is already given the TV King award in everyone’s hearts!”