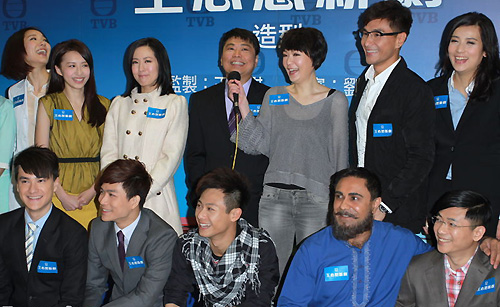 Kristal and Ruco had known each other since working at ATV previously, however Chok Family will be their first partnership. Asked whether there will be kissing scenes, Kristal said, “I am a very open person.” She joked that the reason she acted was to take advantage of the opportunity to kiss different actors. Asked whether her  husband, Chapman To (杜汶泽), would mind, Kristal said, “He will be happy for me. I had kissed Louis Yuen in a previous drama. If I were to kiss Ruco Chan this time, that is a big improvement! My husband has collaborated with numerous young actresses in the past, even kissing Dada Chen (陈静) and Fiona Sit (薜凯琪)!”

Filming a comedy for the first time, Ruco Chan said,” I have a humorous side. It would not be considered acting if I were to portray myself. An actor should try to do different roles.” Ruco indicated that he hoped to achieve new sparks with the cast of Chok Family. Jayne: Ruco passed up Big Eunuch in order to film Chok Family. I think TVB has difficulty juggling the schedule of their male leads…thus he was pulled into Chok Family instead. I think portraying an eunuch may have been more interesting and perhaps a more rare acting challenge.

Louis Yuen and Kristal Tin are good in comedy…I also find the Indian actor to be quite funny.