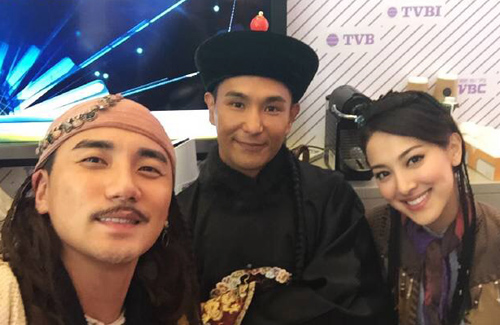 TVB promoted nine of its new drama productions at the event, including Captain of Destiny <張保仔>, Lord of Shanghai <梟雄>, Under the Veil <無雙譜>, Rogue Emperor <流氓皇帝>, With or Without You <東坡家事>, Blue Veins<殭>, Brother’s Keeper 2 <巨輪>, Limelight Years <華麗轉身>, and Wudang Rules <潮拜武當>, which is currently airing in Hong Kong.

Captain of Destiny, a drama about the Cantonese pirate Cheung Po Tsai, features many large-scale naval battles. Starring Ruco Chan, Tony Hung, and Grace Chan, the drama employs extensive CGI to make the naval battles convincing. The drama completed its filming last January, and has been in post-production ever since.

Attending such a grand television festival for the first time, Tony Hung was excited to promote Captain of Destiny in Shanghai. Tony said, “All the happy and difficult moments during filming came back to me. Seeing Grace Chan and Ruco Chan in their costumes today, we couldn’t resist talking about our interesting filming experiences. We hope that our drama will successfully air in October.”

Lord of Shanghai, Under the Veil, and Captain of Destiny are some of TVB’s most expensive productions in recent years; Lord of Shanghai, an epic series about a triad family in 1930’s Shanghai, stars Anthony Wong (黃秋生), Kent Tong, and Wayne Lai.

Under the Veil, which also stars Wayne Lai, is a large-scale historical fantasy series with unrelated story arcs. The drama’s stars—which includes Bosco Wong, Eliza Sam, and Katy Kung, had to portray a plethora of different characters throughout the series, adding more challenges to their performances.

TVBC, a new joint venture established by TVB, CMC, and SMG to target the Mainland China market, also announced that it will be responsible for managing the Mainland activities for its Hong Kong artistes.