With Sinister Beings <逆天奇案> outperforming expectations, the cast and crew held a celebratory dinner and even TVB executive Eric Tsang (曾志偉) attended to show his support. Due to his drama being a success, Ruco Chan (陳展鵬) is considered a lucky charm and will make special appearances in three upcoming dramas.

Asked if the good reviews of Sinister Beings in China has brought about additional work, Ruco lamented that the borders are still closed so they had to promote the drama virtually, and hopes the the pandemic will be over soon. However, his new song will be released soon and he will follow up with two more songs later this year.

Ruco Used to Prop Up Other Dramas

Given Ruco’s popularity, he will have cameos in Shaw Brothers’ ICAC Attack <廉政狙擊> and TVB drama, Falling in Love With You in Childhood <童時愛上你>, which stars Samantha Ko (高海寧) and Owen Cheung (張振朗).

Although it was originally said that Ruco would lead in Jazz Boon’s  (文偉鴻) police drama Invisible Team <隱形戰隊>, Kenneth Ma (馬國明) is now officially confirmed for the role. Ruco will only make a special guest appearance instead.

Although cast in three dramas, none of them are leading roles. Asked whether he feels that he is being used to help increase ratings, Ruco replied, “I’m leaving everything in the company’s hands. I’ll do whatever jobs they give me. Having work during this time is already a blessing–I need to take care of my family! I’m not afraid of hard work, and I will try my best.”

When reached for comments, Jazz denied the rumors and said that Kenneth was always set to be the male lead. He revealed that Ruco’s character is very unique, a role he has never played before.  He confirmed that Natalie Tong (唐詩詠), Joel Chan (陳山聰), Tiffany Lau (劉穎鏇), Moon Lau (劉佩玥), Jazz Lam (林子善), Elena Kong (江美儀), and Jimmy Au (歐瑞偉) will make up the rest of the cast.

Details for The Invisible Team have not been released yet, but the drama will focus on anti-terrorism. The “Invisible Team” will be the secret weapon of the police force, and is similar to the team in Mission Impossible. Its team members include: Kenneth, Natalie, Moon, and Jazz, while Joel and Tiffany will be members of the Counter Terrorism Response Unit and will have many action scenes. All cast members are working out to ensure that they are in top condition for filming. 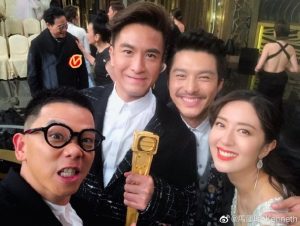 Still reading the script, Kenneth looks forward to partnering with good friends Natalie and Jazz again, and praised Joel as a good actor.

“I’ve worked with Jazz Boon before when he was a director, and his dramas are always guaranteed to be high quality. I am excited to work with a different producer because he may be able to uncover my undiscovered qualities. I also decided to accept this drama, because the character shows a new side of myself to the audience,” Kenneth said.