In a surprising turn of events, the TVB action comedy Agent C9 <C9特工>, led by Samantha Ko (高海寧), is now back on the list of dramas to-air this year—and it’s going to be an anniversary drama.

Starring Samantha Ko, Kenneth Ma (馬國明), and Lai Lok-yi (黎諾懿), Agent C9 stars Samantha as a secret agent, code name C9, who retires into a life of marriage after she loses contact with her headquarters in an explosion. The appearance of another agent, B3, brings C9 back into the business. Agent C9 is Samantha’s first drama as lead actress. 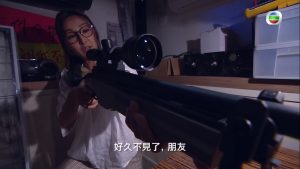 Originally scheduled to premiere on September 16th, picking up the time slot of Kristal Tin’s (田蕊妮) Girlie Days <她她她的少女時代>, TVB pulled out Agent C9 to make room for Joel Chan (陳山聰) and Selena Lee’s (李施嬅) Barrack O’Karma <今宵大夏>. Due to a “weaker” leading cast, there was talk that TVB would shelve Agent C9, so TVB’s decision to bring Agent C9 into the forefront is a surprising welcome.

Alongside Agent C9, The Man Who Kills Trouble <解決師> starring Vincent Wong (王浩信) is confirmed to be this year’s anniversary drama as well. Although Wonder Women <多功能老婆> starring Miriam Yeung (楊千嬅) has no confirmed air date as of yet, the Ella Chan (陳寶華) produced series is likely to be airing around the anniversary season.

In TVB tradition, big budget action dramas with the largest cast tend to be saved for broadcast at year’s end. However, neither The Man Who Kills Trouble nor Wonder Women seem to be that type. Experts say it’s because TVB has nothing left to air.

The Offliners <堅離地愛堅離地>, The Maid Alliance <丫鬟大聯盟>, and Finding Her Voice <牛下女高音> are definitely out of the question—not only are they smaller productions, those dramas also star the infamous Jacqueline Wong (黃心穎), who is now frozen. Airport Security Unit <機場特警> and Death By Zero <殺手> involve police and triads, both too controversial to air especially considering Hong Kong’s current political climate. It is too soon to air The Final Confession 18 Years Later <十八年後的終極告白> who stars Justice Bao: The First Year <包青天之再起風雲> actor Shaun Tam (譚俊彥).