While the split was never officially confirmed by both parties, TVB actress Samantha Ko (高海寧) and songwriter Tang Chi-wai (鄧志偉) quietly broke up earlier this year. The news came after the media noticed that they had unfollowed each other on Instagram. At the time, it was reported that their split was due to their busy schedules.

But new developments are reversing those claims. According to new reports, Tang had cheated on Samantha, which caused the breakup. Tang took the initiative to tell reporters on June 2 that he had been stuck in a “illicit love dispute” involving a woman he identified as Miss S, a non-celebrity.

According to Tang, he met Miss S through a mutual friend in March 2019. He claimed that Miss S wouldn’t leave him alone, such as persistently spreading fake information about him through social media and threatening him to be in a relationship with her. She even attempted to spre 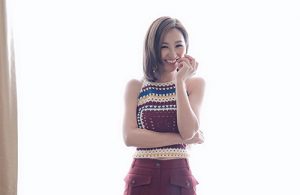 ad fake rumors about Samantha, and sent harassing emails to his colleagues, managers, and family members. She told him that she would only stop the harassment if he gave her an apartment in Residence Bel-Air.

Tang stressed that he was never in a relationship with Miss S. He has already pursued legal action: he called the police on February 18, and Miss S was arrested on February 28 on accounts of criminal intimidation.

Miss S was reached out by reporters, who told a completely different story. She confirmed Tang’s claims that they met in March 2019, but she said they actually dated for ten months before splitting this January. Miss S shared her text message exchanges with reporters, which disproved Tang’s claims that they weren’t together. Tang was also careful enough to not leave any photo evidence behind, and never took any photos with Miss S.

It wasn’t until May 2019, when there were reports that Samantha and Tang were considering marriage, when Miss S realized that she had been part of a lie. Although she was always aware that the media often linked Samantha and Tang together, Tang told her that he wasn’t dating Samantha. Miss S claimed that Tang ultimately called their relationship off because he was “getting annoyed” by her persistent questions.

As for the police suing Miss S for criminal intimidation, Miss S said that Tang was taking preemptive measures on her. Her reasons for telling the truth was because she felt wronged.