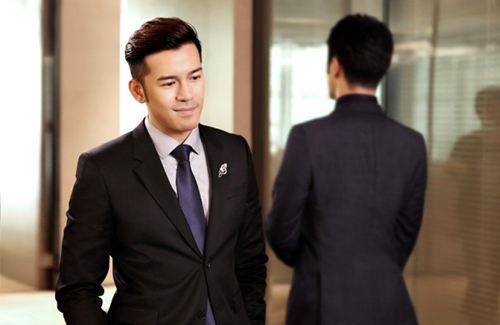 The popularity of TVB’s 2014 crime drama Line Walker <使徒行者> in China opened up a lot of opportunities for Sammy Sum (沈震軒) in the mainland. After the broadcast of his debut Chinese drama Hello, Joann <你好喬安>, which aired on Zhejiang TV and the streaming service LeTV, many Chinese agencies have reached out to Sammy for a collaboration.

However Sammy, whose management contract with TVB will expire in October, is unsure about where to go yet. “I’m still considering,” he said. “It’s because there are many choices, so I want to take the time to decide.”

Sammy said he will make the decision after his contract ends, and will announce his decision in November. Asking if he will consider pursuing the Chinese market, he said, “That is definitely something to consider, but I also want to pursue a film career.”

In the meantime, the 33-year-old will busy himself with self-enrichment classes, as well as enroll in more acting courses.

Hello, Joann stars Stephy Qi (戚薇) as Joann and Wang Xiaochen (王曉晨) as Ni Hao, two close friends who come across challenges in their work and love lives. Sammy stars as Steven, the ambitious and unscrupulous general manager of a Beijing company.

Comparing his character’s ambitions to his own, Sammy said, “I have always been very career-minded. I made my debut through the [TVB] artiste training class, and I slowly worked my way up from there. Everything I have now, it was because I fought for it. If you don’t have ambition, it’s hard to survive in this field. I love music and acting, and that’s why I’m still here.”

On his experiences of shooting his first Mainland Chinese drama, Sammy laughed and said, “TVB’s such a good training ground. It’s like training at the Shaolin Temple. I didn’t come across any trouble at all.”