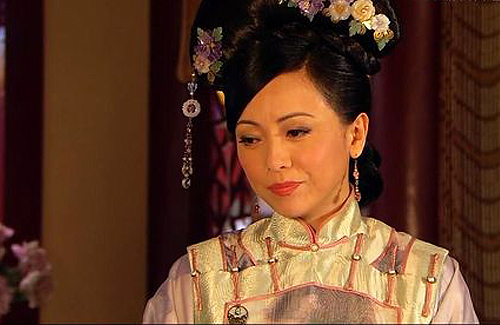 Since Sheren Tang (鄧萃雯) publicly criticized TVB for poor filming conditions, many watched closely as the two parties engaged in a war of words far more sensational than the currently aired Beauty at War <金枝慾孽貳>. Earlier this week, reports alleged that Sheren’s public outlash enraged TVB, putting the actress at risk of being “frozen”, or suspended, by the company. Acknowledging the rumors, TVB’s General Manager Mark Lee (李寶安) chastised Sheren for damaging team spirit by denying responsibility for Beauty at War‘s failures, and angrily stated he would not collaborate with her further.

Today,TVB’s Assistant General Manager Peter Au (區偉林) clarified the current situation, and insisted it is only temporary. “Don’t use the term ‘force out’. It is like having an argument with family. It’s best to not say too much, and rest for a bit. [We] didn’t say we won’t collaborate [with Sheren]. We just want to deal with this matter first. We wish this didn’t happen at all. Team spirit requires a common goal. Sometimes team members must sacrifice their beliefs and honor to reach that goal. The company does not wish to see its artists express personal opinions via the media. We shouldn’t write off others’ efforts, nor use only ratings to gauge success or failure.”

Former co-star Wayne Lai (黎耀祥) also commented on Sheren’s situation. Wayne shared that he rarely keeps contact with Sheren, and does not believe the suspension will hurt her career. “If [they] can’t work together then don’t. Sheren has jobs lined up. She would not be terribly affected by the suspension. TVB is free to choose the people they would like to collaborate with.”

Wayne added that he has not seen Beauty at War and therefore cannot comment about the series’ problems, but noted people’s right to freely express their personal opinions. “When a reporter asks me about [Beauty at War], I would always try my best to answer and express myself. We cannot fully understand someone else’s idea of right and wrong. It is important to have our own opinions.”

Eddie Kwan (關禮傑), who starred with Sheren in the controversial series, showed support for his colleague during a radio interview. “[Sheren] is very straightforward. It may be because she studied overseas, and was successful very early in her career. Sheren has actually changed a lot after becoming a [Christian]. Sometimes what she says does not completely express what’s in her heart.”