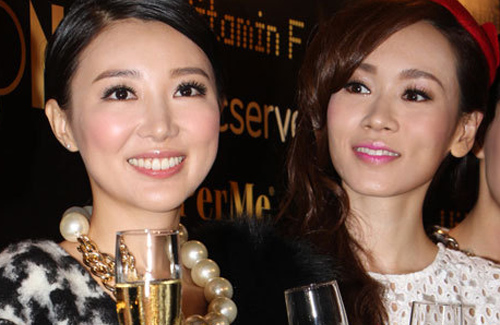 Shirley Yeung (楊思琦) and Sire Ma (馬賽) appeared as special guests at a fashion show. Although Shirley is not close friends with Sire, Shirley complimented Sire’s positive attitude. Shirley offered encouraging words to Sire, whose explicit lingerie video was leaked on the Internet in July.

“I was told that Sire would be attending the show today, and I just saw her backstage. I think she is very pretty today, and she looks very well. A lot of people have been paying attention to this issue lately; everyone should give her some space. I hope she can be happy and be strong,” Shirley said.

Shirley was previously the target of negative publicity when she broke up with Gregory Lee (李泳豪) after becoming pregnant with diver Andy Ng’s (吳帥) daughter. Now raising her two-year-old daughter Krystal as a single mother, Shirley faces financial and media pressure. Shirley hopes that everyone will leave Sire alone and not intrude on her personal matters.

Since leaving TVB in May after 13 years of employment, Shirley is no longer actively filming television series and needs to look for other sources of income. Media reports speculate that Shirley needs $100, 000 HKD to be able to financially support Krystal. Surprised at the estimation, Shirley exclaimed, “Wow, you guys helped me calculate already, even I don’t know how to do that. Actually, now that I’ve parted ways with TVB, I’ve been offered a lot of different jobs and I’m very happy and thankful that clients want to hire me. I have to see if I can handle the work, look at my schedule and see how busy I am before accepting these jobs.”

Besides working in Hong Kong, Shirley has been spending a lot of time in Mainland China where she is accompanied by one female assistant to help her with daily activities. Krystal is under the care of Shirley’s mother while the 36-year-old actress is traveling for work.

12 comments to Shirley Yeung Tells Sire Ma to Be Strong