Actress Shirley Yeung (楊思琦) appeared at a health food event seven months pregnant along with her daughter Krystal, who happily posed for photos. Seeing that Shirley’s baby is arriving soon, reporters wondered if this event would be her last appearance. She expressed, “If I’m in good condition and I can manage it, then I’ll still attend the events that I have scheduled for me because I enjoy the liveliness.” 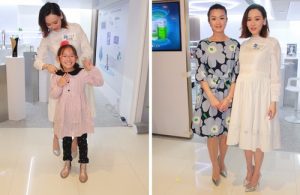 Despite her pregnancy, Shirley’s limbs appeared slim in the long white dress and four-inch heels. She wouldn’t have looked pregnant unless she deliberately caressed her round belly. But signs of pregnancy don’t lie, and Shirley shares that she has been feeling tired easily so she is resting a lot more these days.

She said, “Once I finish eating, I feel like my baby wants me to rest. I would nap for at least two hours every day, so I’ve been feeling super bloated.”

Reluctant to Talk About Husband

When reporters commented on her heels, Shirley said she probably can’t walk far because her heavy stomach has been causing extreme pain in her knees and tailbone. Not to mention, her baby is quite active and often likes to kick her. Her answer then prompted questions about her husband, such as if he worries about her and if he gives her massages. Shirley seemed reluctant to bring up her husband, so she simply said, “It’s okay.”

She then tried to change the topic by revealing her daughter gives her massages. “I get cramps really easily, so my daughter gets scared when I yell out in pain, and she’d come over and massage me thoughtfully,” Shirley revealed.

The actress also shared that she has been looking to purchase beds and other baby products, but hasn’t found the time to decorate the baby room yet. As for the baby’s gender, the actress said everyone is going to find out soon. With just two months left before the baby arrives, Shirley lamented, “I’m going to miss the miracle feeling that comes with having a life inside my stomach.”