Shirley Yeung (楊思琦) will be expecting her second child!

The former Miss Hong Kong beauty queen and TVB actress confirmed the pregnancy news today, sharing that she is four months pregnant and that the father of the baby is her husband, whom she wed a few months ago. As her husband is not a celebrity, she did not feel the need to announce the news.

The 41-year-old is also a mother to seven-year-old Krystal Yeung (楊卓穎), her daughter with former lover Andy Ng (吳帥).

Pregnancy speculations came about after a netizen spotted Shirley in Seoul, South Korea last month. The netizen snapped a picture, in which Shirley’s protruding belly could be seen beneath her loose-fitting sweater.

Shirley also updated her social media with a photo of herself wearing the same outfit, but the image was photoshopped. 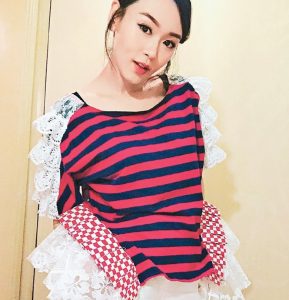 On October 8th, while attending an event in the mainland, Shirley appeared in a baggy outfit. She attempted to hide her belly, but was unable to hide it for long.

It wasn’t until yesterday when The Price of Greed <千謊百計> actress finally confirmed the news about her pregnancy, ending speculations once and for all.

“Thank you for all the blessings,” said Shirley. “A few months ago, my boyfriend and I registered for marriage overseas. Now is finally the right time to tell everyone this good news. I finally found my ‘forest of love’!”

Shirley said having kids with her husband had always been part of the plan. It wasn’t an accident, and her daughter Krystal is excited about being an older sister.

“I wasn’t purposely trying to hide it,” said Shirley when asked why she didn’t announce the news earlier. “My husband is not part of this industry, so I didn’t want to affect him. I want things to come naturally. I’ll be honest about it once people find out.”

Despite her pregnancy, Shirley will continue to perform as a guest for Louie Castro’s (賈思樂) upcoming “Me & My Girls in Concert”. The veteran singer didn’t know that Shirley was pregnancy when he first reached out to her about the concert.

“We shot the promotional poster two months ago, and I had no idea she was already pregnant then,” he said. “I asked her if she would be interested to do a dance number, but she said no, because she didn’t want to remember so many things. I understand why now.”

He joked that he’s never performed with a pregnant woman on stage before. “I’ll definitely take care of her. I’ll tell her not to get too excited. I don’t want her to give birth on stage!”

Shirley’s ex-boyfriend of 9 years, TVB actor Gregory Lee (李泳豪) was asked to comment on her new pregnancy. The actor apologized, and said he had no comment.

Shirley and Gregory started dating soon after she was crowned Miss Hong Kong in 2001. A rising star and a promoted actress, Shirley kept her romance with Gregory low profile. In 2011, Shirley got pregnant and announced her breakup with Gregory, carelessly exposing that she had cheated on Gregory with diver Andy Ng. At the time, Gregory said he would still be willing to marry Shirley and care for the baby as his own child. But Shirley left both Gregory and Andy, insisting on raising the child herself.