Shirley Yeung (楊思琦) finally returned to work after giving birth to her son Kody in early February. The mother of two accepted an interview with Happy Party <開心大派對> and shared details about her newest family member. As her husband is also a fairly new addition to her family, she did not shy away from talking about him, but she hopes to protect his identity.

Since her husband is not an entertainer, Shirley did not disclose his identity even when she announced her remarriage and second pregnancy. Despite her efforts to shield him from reporters, the paparazzi still wait by the door of their residence day and night, hoping to catch him on camera.

In response to the media’s curiosity, Shirley frankly said, “We will let things happen naturally. I know people are following us, so we can only take it easy. I can’t be scared over such trivial matters each day because I am busy. I have a lot of things to take care of so I can’t worry too much. I think his identity will be revealed one day.” 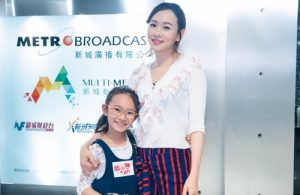 Before marrying her new husband, Shirley had Andy Ng‘s (吳帥) daughter, Krystal Yeung (楊卓穎). According to Shirley, Krystal takes really good care of her brother. “She has already become an expert after watching me change and feed her brother,” Shirley shared. “She even knows how to burp her little brother after he drinks milk while singing to him. She loves singing to him. She is very gentle and a good helper.”