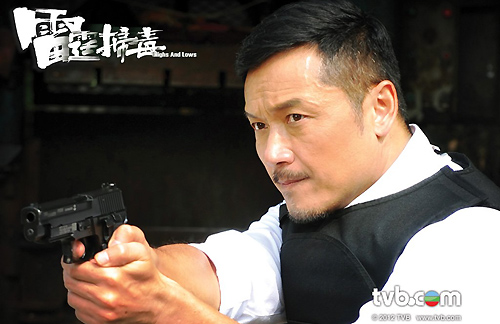 Although the final episode of The Highs and Lows <雷霆掃毒> will not air until November 2, the endings for the main characters are already leaked!

Raymond Lam’s (林峯) Sai Lok, or Happy Sir, did some secret investigations behind the scene, and discovered that Gordon (Michael Miu 苗僑偉), is a corrupted cops. With support from his team, Raymond sets out to arrest Gordon.

Knowing he has passed the point of no return, Michael does have the determination to get rid of his good friend Raymond who is investigating his corrupt actions. Michael is finally shot and killed by Raymond.

As for the informant turned Drug Queen Pat Chan, played by Kate Tsui (徐子珊), the ending is equally tragic. She becomes dejected and depressed at the end, and starts attacking the police. She is then shot multiple times by the police force. Another corrupt cop, Derek Kwok (郭政鴻) suffers the same fate.

Highs and Lows does have a happy ending for Ella Koon (官恩娜), who takes a bullet for her secret crush, Raymond Lam. After Ella survives the injury, the drama ends with the beginning of their relationship.