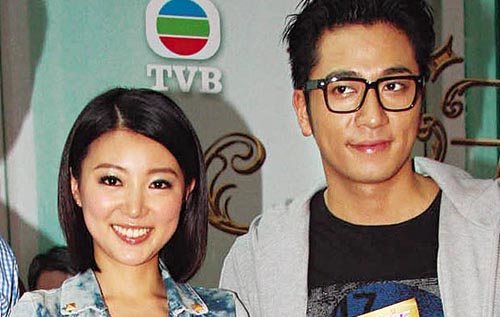 In OL Supreme, Ron and Sire play a couple and shared frequent scenes together. Due to her sweet features and 32C figure, Sire has gained new popularity recently. Despite keeping their distance publicly, Ron allegedly fell for Sire shortly after OL Supreme started filming in July 2009. According to inside sources, Ron often drove Sire home and gave her small gifts. Allegedly, Sire bought a house in Tseung Kwan O to be closer to Ron’s home as well.

Many celebrities maintain their own blogs online. Earlier, Sire uploaded photos of Ron and herself, while using a morphing software to produce a photo of what their “daughter” would look like. Sire said that she spent one hour awaiting the morphed results of the baby photo. F: Have you been driving Sire Ma home lately?

R: Absolutely not! Otherwise, there would be photos published already! I swear that she never got in my car!

F: But Sire is your neighbor and lives in the same housing complex as you!

R: From reading the newspaper, I learned that she lives in Tseung Kwan O. But I have moved to Tsim Sha Tsui  for one year already!

F: There are many intimate photos of you and Sire together in her blog. There is also a morphed photo of what your “future” baby would look like!

R: Prior to posting our photos on her blog, Sire asked me. However, I truly did not know about that baby photo in advance!

Jayne: From the article, it does not appear that Ron and Sire Ma are truly dating. There is not enough evidence.

Why did Sire post that morphed photo of what their “daughter” would look like? Does she harbors a crush against Ron? Or did Sire use Ron shamelessly to self-promote herself? Given the obvious consequences of posting the baby photo,  I thought it was a gesture in poor taste.