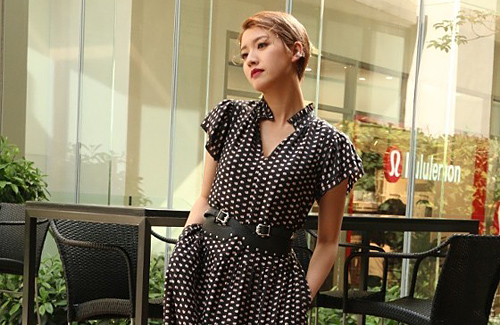 Passionate about acting, Sisley Choi (蔡思貝) hopes to leave a lasting mark in the entertainment industry.  However, without any formal acting training, Sisley would like to continue refining her skills and intends to continue acting for years to come. Underneath the glamour of the entertainment industry, Sisley faced the pressures of being a celebrity and was subjected to cyberbullying. Diagnosed with bipolar depression two years ago, Sisley opened up about her emotional struggles and the impact on her mental health.

While many people think Sisley gives off a cold and detached attitude, the 29-year-old actress explained, “I’m scared of going to crowded places. Before the Miss Hong Kong Pageant, I would say everything and do everything. I even told people where I lived! Look at my history and you would know I always made mistakes. Over time, I didn’t understand what was right and wrong, and that anxiety made me depressed. I decided to just hide myself.”

As Sisley tried to cope with her emotions, she still put up a calm demeanor in front of others. “I tried to be professional. I tried to laugh more at different occasions but when I returned home, I often had a headache. It felt like my head will crack open.”

When she won the Most Popular Female Character Award for her role in Legal Mavericks <踩過界>, Sisley gave hints of her worsening condition when she quipped, “A lot of people don’t like me.” While it was a joyous event for Sisley, it was also a low point in her emotional state.

Remembering the incident, Sisley shared, “I went blank for a while. I thought that since I was winning my first award, it would be befitting if l thanked everyone behind the scenes, but I couldn’t influence others. I want to make an impact on others and pay attention to people on the bottom of the pyramid, because I was also at rock bottom. My emotional state was very poor.”

When asked why Sisley felt like she had hit rock bottom, she said, “A lot of negative things. People were comparing me to other people, gossips and so on. It felt disrespectful. I also have a mother. Even if I am not smart, I work hard. You can say that I can’t act well, but at that time, I was being cyberbullied. They told me to die! There were a lot of attacks and I couldn’t tolerate them. I always hate being treated unfairly.”

Diagnosed with bipolar disorder, Sisley did not know how to effectively manage her emotional state at first. Thinking her family would not understand, she would rather hide and cry alone, and even resorted to violent tantrums, “I released my emotions by hitting things around the house and I would hit myself. I don’t want other people to think I’m using my emotional illness as pity. I hate that.”

Admitting that she had lost control of her emotions during filming, Sisley said, “Afterwards I would apologize. Sometimes I might not be professional, and I hope for everyone’s understanding. I know that even if I don’t express my emotions, I can’t control my facial expressions.”

While Sisley admitted that she is still trying to cope with her negative emotions without any medications, she is thankful for her friends’ support, “At my lowest point, Grace Wong (王君馨) appeared by my side. She helped me a lot, and I am now a Christian. I calmed down after learning that God has a plan.”