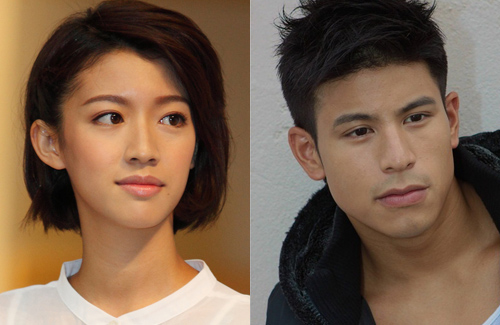 Rumor magnet since the beginning her of debut, Sisley Choi (蔡思貝) is once again linked with another male star. Spotted cozying up to Alan Wan (溫家偉) during a group dinner for Young Charioteers <衝線>, it is speculated that the couple is in the beginning stages of a new romance.

After completing a promotional event for the series, Sisley was surrounded by a large group of male fans. Seeing the crowd was trailing her, Sisley briefly stopped to chat with her fans.

Hopping into the car with Alan after the dinner, the couple originally planned to spend some private time with each other, but after noticing the trail of reporters on their tail, Sisley had no choice but to get off the car and take the train. Aimlessly walking around after ditching Alan, Sisley then subsequently called good friend Whitney Hui (許亦妮) to accompany her.

33 comments to Sisley Choi and Alan Wan Are Dating?