On New Year’s Day, Dispatch exposed that South Korean actress Son Ye Jin and actor Hyun Bin have been dating for the past eight months, as part of the tabloid magazine’s annual couple reveal. The well-loved couple, who turned from friends to lovers after starring in hit rom-com Crash Landing On You, admitted to their romance and caused an uproar. It sent fans into a state of excitement and frenzy as they bolted to rewatch the stars’ interactions and dig up more information. Amidst this commotion, they uncovered Ye Jin’s family photo. Amongst praises for the family’s attractive looks, it also came to netizens’ attention that her father’s younger self bears a strong resemblance to Hyun Bin. 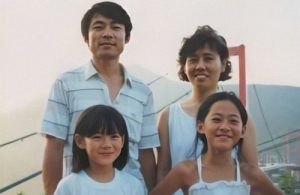 SBS’s Midnight TV Entertainment show previously revealed the family photo in 2012. At that time, she appeared as a guest on the show to share how she manages her skin. The production team consequently displayed how Ye Jin inherited clear skin from her parents. In the photo, her family’s attractive features stood out despite not wearing makeup. Ye Jin’s father looks slim and has tan skin, her mother has deep double eyelids, and her sister has smooth and healthy-looking skin.

Netizens highly praised their good-looking family genes and specifically pointed out that her father looks extremely like Hyun Bin, while others also found him resembling actor Gong Yoo. They also mentioned that 6-year-old Ye Jin looks very beautiful with her cute dimples and eye-smile.