Sonija Kwok Works Her Schedule Around for Her Daughter 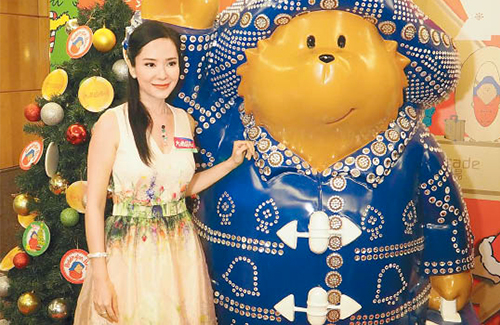 Sonija Kwok (郭羨妮) made a rare appearance in Hong Kong a few days ago, attending a Christmas event at The Sun Arcade shopping center in Tsim Sha Tsui. She has been spending the past year working in Mainland China, making small event appearances across the country.

The 42-year-old hasn’t filmed a television dramas since leaving TVB in 2015. The former beauty queen would rather take up smaller jobs in the meantime so she could have more time for her 4-year-old daughter, Kylie.

Sonija originally planned on bringing Kylie and her husband, Chinese director Zhu Shaojie (朱少杰), to an overseas vacation, but she decided to postpone it. “My daughter has a dance competition right before Christmas. My husband also has to work, so the trip will have to be saved for later.” (Where do you plan to go?) “My daughter loves beaches, but she also wants to meet Santa Claus. I have thought of going to England. It really depends on my family.”

Sonija’s good friend, Steven Ma (馬浚偉), just had a successful run with his theatrical play, Fortuitousness: Xu Zhimo <偶然‧徐志摩>. Sonija was there to support him. “It’s so good! The production value was very high and I’m itching to get back on stage!” (Have you recommended yourself for the cast?) “He told me that he has already saved a spot for me in his next production. I can’t turn it down!” (Have you thought of filming dramas again?) “It really depends on the script. There’s a lot more work involved.” (Maybe make a comeback when your daughter is older?) “It doesn’t have to be. If the filming duration is short, I’ll consider it, but I really want to spend more time with my daughter. At her age, it is important to work on our communication and relationship.”