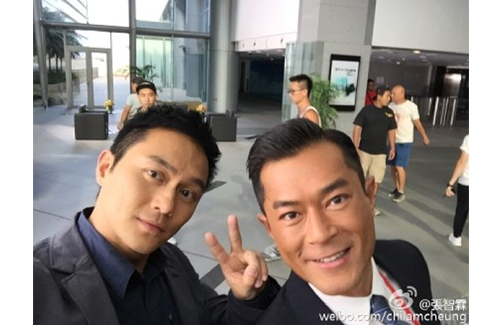 After weeks of no sleep and long work hours, Chilam Cheung (張智霖) and Louis Koo (古天樂) are finally putting their guns down for the Hong Kong crime film S Storm <S風暴>. The movie directed by David Lam (林德祿) recently wrapped up shooting, and the two leads immediately shared the good news on social media, celebrating a job well done.

It has been nearly ten years since Chilam and Louis last closely worked together in a film. The former TVB-managed artistes collaborated for the first time in the 1996 TVB drama Cold Blood Warm Heart <天地男兒> and were the two lead actors in the 1998 action thriller movie, The Suspect <極度重犯>. Chilam and Louis both starred in this year’s Lunar New Year film Triumph In the Skies <衝上雲霄>, but did not have many scenes together.

In the thrilling S Storm, Chilam, who plays a CID detective and Louis, an ICAC officer, team up to catch a wanted criminal. Despite it being over ten years since their last collaboration, chemistry sparks still flew between the duo.

Chilam shared that he has had a lot of fun doing the movie with Louis. However, he admitted that he would not miss the long working hours at night. “It’s been a fun ride, and I had a great time with the crew. However, [the long film hours] tired me out.”

On how it felt like to work with Louis again, Chilam said, “Great. We’ve both matured.”