Started from the Bottom: Kirby Lam Had Never Spent Money On Herself 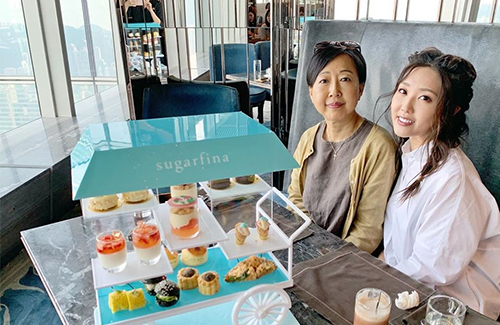 When one thinks of Kirby Lam (林秀怡), one may think of Threesome’s <三個女人一個「因」> Lee Tung-ling. Or OMG, Your Honour’s <是咁的，法官閣下> Faye. Or maybe even Ghetto Justice II’s <怒火街頭2> Wing, but that’s only if you really pay attention to TVB dramas.

And now, she has finally found a role that people could recognize her with—Ruby in My Commissioned Lover <婚姻合伙人>.

The 27-year-old really started from the bottom—11 years ago in 2008, Kirby signed an artiste contract with TVB for three years. She thought she would leave after the contract was up, but three years became another three, and another three. Kirby loved her job too much to leave.

Growing up in a public housing unit in Tin Shui Wai, Kirby was raised by her single mother. She attended Buddhist Mau Fung Memorial College, but according to Kirby, she wasn’t the best of students.

“I had horrible grades,” she said. “I just couldn’t sit still. You could say I was a bad student, but I didn’t cause any trouble for the teachers either.”

Her true calling wasn’t studying or pursuing a higher degree—it was performing. She was involved in many extracurricular activities, which included acting. “I was part of a drama club. To put it nicely, I didn’t waste time. On the other hand, it definitely didn’t help me do better in school. But in my eyes, I didn’t regret this path. I get to do what I love. I already feel blessed.”

A Bad but Filial Student

Though Kirby likes to consider herself a bad student, she is far from deviant. After her parents’ divorce when she was 8 years old, she and her mother moved to a public housing unit in Tin Shui Wai.

“We’re very close,” said Kirby. “Just like sisters. Because it’s only the two of us, we often run around the flat not wearing clothes.”

When Kirby was still in school, her mother left her job after sustaining a serious injury. Upon her graduation, Kirby had to take on the duty of being the breadwinner. To this day, even as Kirby has started to earn more, she still lives frugally and doesn’t like wasting money on herself unless she absolutely had to.

Last August, her mother was diagnosed with cervical cancer. “I was in denial,” said Kirby. “I nearly broke down, but I didn’t want my mother to worry, so I had to hold my tears and find a way to cure her.”

Due to the long waiting list of public hospitals, Kirby decided to switch tactics and have her mother seek medical attention at a private hospital instead. She spent all her savings on her mother.

“We all have to prepare for emergencies,” said Kirby. “If I can use money to save my mother, I’ll use it in a heartbeat. It’s okay if I spend it all. I can always find ways to earn it back.”

Kirby and her boyfriend, Ching, has been dating for two years. When they met, Ching was still working as a production assistant (PA) at a television station. Now, he’s become a director.

“Being in the same industry helps our conservations,” said Kirby. “He understand what my job entails. He understands why I never have time.”

Being rich would mean nothing for Kirby if she doesn’t get to do what she loves. Kirby considers her acting career to be her dream job. “I get to live and experience someone else’s life. I get to do things I can only imagine.”

Ching said, “She loves acting, and I do hope she succeeds. We will all work together. There’s nothing I can really do to help her. All I can do is stay by her side and support her.”

On the positive qualities of Kirby, Ching said, “She is adorable, smart, and kind, but she’s always lost. Maybe it’s because she relies on other people too much.”

3 comments to Started from the Bottom: Kirby Lam Had Never Spent Money On Herself