Acclaimed Hong Kong actor Stephen Fung (馮德倫) directed an American TV show again, and this time it’s Wu Assassins <五行刺客>. The upcoming action series will debut on Netflix on August 9, and the trailer was just released yesterday. While different directors were hired to shoot each episode, Stephen started the ball rolling by helming the first two, which became the trailer focus.

Stephen purposely avoided including stereotypes that foreigners have on China, such as elements of dragons and phoenixes. He explained that the big cities in China are very prosperous, and do not necessarily have dragons and phoenixes. Stephen hopes the audience will be able to see new things, such as various literary elements and Stephen’s favorite love: Chinese opera.

He also said his experience differed from the last time he participated in an American TV show since he got to work with an entirely new team. He even praised The Raid: Redemption actor, Iko Uwais, for his ability to adapt to different styles of action.

Full of intense fighting scenes, the series will follow Iko, an aspiring chef who gets thrown into protecting San Francisco’s Chinatown from evil forces after he learns he’s actually a Wu Assassin. 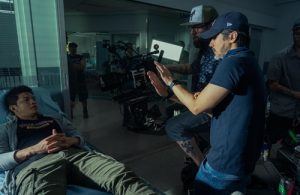