In July, Steven Cheung (張致恆) revealed on social media that he has become a father, which inadvertently led to the discovery that he has had multiple girlfriends, cheating on them multiple times. The mother of his son is, in fact, a fan called Au Yin-man (區燕雯; known as Man-man), who he married in September 2019.

The scandal had severely damaged Steven’s image in the entertainment industry. Though his contracts with TVB and Shaw Brothers were not terminated, Steven was unable to find work after the scandal broke. Paparazzi later found that Steven had taking smaller, odd jobs instead, such as working as an assistant in the kitchen at a four star hotel. Working 10 hours a day, Steven wanted to use this opportunity to make up what he has lost, and to prove to his family that he is willing to change. 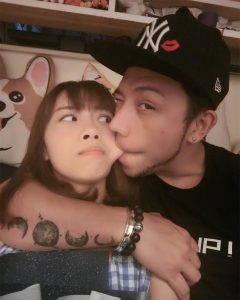 A few days ago, his wife Man-man updated her Instagram story with a cryptic message: “Sometimes when you get disappointed, there is no way to make up for it. There’s no way of going back.”

The story, of course, trended on gossip circles, leading to the speculation that Man-man may be regretting her marriage to Steven. Some even said that it is possible Steven may have committed another mistake again.

But Man-man was quick to clarify. The following day, she uploaded an intimate photo of Steven biting her cheek, reassuring her followers and friends that her relationship with Steven has not changed. Her original IG story was just her thoughts on a story she had heard from a friend.

“My husband and I are well,” she said. “He’s changing and working very hard for his family. If he’s not working, he’s taking care of our child. He’s always caring for the baby. I just want to use this platform to say that just because someone has done wrong before doesn’t mean he will always do wrong! People will change! Hopefully, in my next update, it’ll be a positive one, one that would make people happy and send us messages of blessings.”

Steven expressed his thoughts in a separate phone interview, saying that he felt “helpless” that a harmless message could create so much drama and misunderstandings. “I’m in this industry, so it’s expected. She was just expressing her feelings on a private platform. But that is how the world is like! The most important thing is that you know what to do next.”

He said that no matter how many times he would clarify, people would still misunderstand. “The only thing I can do now is to prove myself that I’ve changed and have been doing good. For my son and my wife, I will tread on. (How are your finances?) Okay. We’re all working hard.”

Steven then expressed wanting to return to the entertainment industry, as being an entertainer remains to be his biggest interest. Asking if he had applied for Comprehensive Social Security, he said, “There’s no need to! I still have my hands and feet. I will work hard.”