Currently seen in ViuTV’s new drama Till Death Do Us Part <婚內情>, which examines infidelity in marriage, Sunny Chan (陳錦鴻) believes that one choice leads to another, resulting in certain outcomes in relationships. While discussing his perspective in relationships, Sunny revealed that he was once attracted to co-star Jessica Hsuan (宣萱) and regrets not pursuing her.

Married to his wife Ada To since 2004, Sunny has had zero romantic rumors. Sunny grew up in a family full of women as his father passed away when he was young. His mother always taught him that he should be serious in love. If he holds hands with the girl it would mean that they are at the stage of marriage.

“Though I feel that when you start dating, you should not automatically aim for the end goal of marriage. On the outside, some girls do not seem suitable as a life partner but after awhile, you’ll realize that she possesses a lot of these qualities. Due to my mother’s influence, I missed out on a lot of opportunities to pursue girls that I was interested in,” the 52-year-old actor said.

Sunny made a confession that he was once attracted to Jessica Hsuan (宣萱). “When we were filming Secret of the Heart <天地豪情>, I thought Jessica was pretty and had a great personality. The only problem was that she spoke English and appeared to be very westernized. I am a very traditional man and I was afraid to pursue her. Afterwards, we collaborated again and I realized that she had another side to her, but I already had a girlfriend [my current wife] and I can’t leave her just because I feel that there is someone who could be better.” 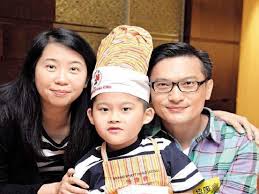 He joked that if he had dated more maybe Ada would not be his current wife! However, in the end, he would always choose her.

When asked about his views on cheating, Sunny indicated that in love, it is hard to determine what is right and wrong. When the relationship between two people change, you can just break up or divorce.

Marriage is not a lock but rather a confirmation of a relationship. You should not break up because of a third party, which is why it is important to take your time finding the right person. Once you have found him/her, you need to treasure the relationship.

To prevent becoming a negative role model to his 12-year-old son who has autism, Sunny has rejected  roles such as drug dealers and murderers. However, in Till Death Do Us Part, Sunny portrays a married man who has countless affairs. Sunny accepted this role because he wants to teach his son that you do not need to be too serious in relationships and that you need to allow yourself to have many choices. For Valentines Day, Sunny even helped his son prepare several gifts for different female classmates.

On Working with Sheren Tang

Sunny has always acted as the good boyfriend or good husband in dramas, so portraying a cheating husband in Till Death Do Us Part was a new experience for him. He has never collaborated with ViuTV before, but filming with Sheren Tang (鄧萃雯) gave him a boost in confidence. “Sheren is very smart and hardworking. If she decided to accept, then this can’t be a bad opportunity!”

Working with Sheren for the first time, Sunny discovered they are polar opposites in their work styles. Sheren likes complete control over the process and watches playbacks after each scene to provide suggestions. Whereas Sunny never watches playbacks as long as the director said everything is fine.

“Early in my career, I received advice from a director who said that television actors constantly watch playbacks. We end up being used to the production format and start unintentionally adjusting to camera placements. He suggested that the only way to improve is to stop watching playbacks and this advice has worked well for me over the past 20 years. I told Sheren to relax and since we were working with a new director, we need to be open to change and be flexible. If we rely on our old methods, we might as well go back to TVB.” Over time, Sheren accepted Sunny’s advice and placed more trust in the team.