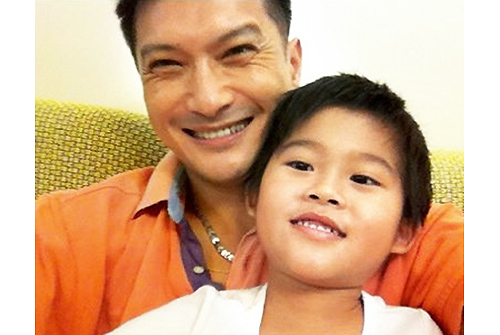 Sunny Chan’s (陳錦鴻) son, Edgar Chan (陳駕樺), was born in 2007. When Edgar was two years old, Sunny and his wife, To Man Wai (杜雯惠), realized that their son had speech problems. Two years later, the couple also discovered that their son had mild autistism. Aside from having learning difficulties, Edgar also had problems interacting with people. To help his son to cope better, Sunny employed a teaching aide to shadow Edgar in school.

Wanted to Prove That His Son Has the Capability

Sunny was informed by Edgar’s teaching aide that he was lagging behind in learning as compared to his classmates. A normal child will learn one word per day, but Edgar can only learn one word in a week.

Realizing his son’s condition did not improve, Sunny took a break from his work in September last year, after filming for a mainland Chinese drama, Mei Tsai is Greater Than His Master <妹仔大過主人婆II>. Losing a stable income for one year, Sunny stated that taking care of his son was a priority.

“I never calculated it at all. Whenever there is a call to invite me to work, I will just reject it. I never think about how much [money] I have lost. As a father, what can I do for my son? I can choose to work from day to night like before, but my son’s condition may never improve.”

Sunny is even more determined to show that his son can overcome his learning barriers, “I feel that there is no reason for him to be like that. Therefore, I use two hours in the weekend to teach him ten words. I want to prove that he has the capability, but I do not have time to spend more time with him previously.”

A father’s Love and Devotion

It was not an easy year for Sunny and his wife. Edgar is an antisocial child, treating his parents as if they were transparent. Possessing slow learning abilities, Edgar also has speech problems and an erratic temperament. Often portraying a “Mr. Nice Guy” in dramas, Sunny is also a devoted father in real life.

For the past year, Sunny spent his time and efforts to nurture his son. Besides accompanying his son to various classes such as speech therapy and behavior management classes, Sunny also spent the rest of the day at home to take care of Edgar.

Sunny dedicated time to nurture his son’s interests. When Edgar developed an interest in music, Sunny and his wife would send him to drumming class. When the school taught him words such as “ferry” and “swimming,” the couple would take their son on a ferry trip and swim together to make him understand the words better.

Edgar does not trust people easily, and does not even accept advice from his teachers and parents. Whenever Sunny corrected his mistakes, Edgar would take it as a form of challenge from his father. As a result, Sunny was determined about building rapport with his son and gradually gained his trust.

The 45-year-old actor revealed that he often climbed trees with his son. “Whenever we climbed a tree together, I will sing to him, ‘Climb tree, climb tree, one step at a time. Daddy holding me and I am climbing high!’ Whenever we had an action, I will make a song for him to make him learn the vocabulary in the song.”

Sharing that the father and son’s tree climbing activity have strengthened their relationship, Sunny said, “He will want to climb as high as possible, and will be terrified whenever he climbs higher. Whenever he loses his balance, I will hold him. We climb every day. He loses his balance every time, and I will be there for him every time. After climbing for two months, we finally established a trusting relationship. When I correct his speech or vowels, he is willing to listen and no longer throw tantrums at me. His improvement is faster. Now when I teach him to pronounce a word at a time, he can understand the meaning.”

Sunny Moves to Suburban District Because of Son

Because of his son, Sunny and his wife moved from the city to the suburban district. Sunny believes that Edgar will improve better if he lives in a quieter environment. Sunny will take his son to walk for an hour in a park daily. Revealing that his son is fascinated with sounds, Sunny hopes to stimulate his son’s interests by exposing him to new things.

In the suburbs, Edgar has the freedom to do things that he likes without disturbing the neighbors. He is able to lead a more carefree lifestyle of playing ball and singing loudly. By exposing Edgar to natural surroundings, he can absorb learning better. Sunny shared that he was able to show Edgar what a snail looked like when he just learnt it from school.

Sunny revealed that Edgar may have inherited the speech problem from him. Sunny had trouble picking up English when he was a child, and could not recite A to Z in the correct order.

Recalling his agony in childhood, Sunny said, “I have an English language barrier. In secondary school, everything was taught in English be it chemistry, physics or biology. I did not understand at all! I was detained in Secondary one, and I did not understand what the teacher was speaking everyday. I only pretended to understand. As I did not want the teachers to complain to my mother, I only pretended to listen during the classes. It’s such a torment, the feeling was terrible. I really do not want my son to be like me.”

Realizing his own language difficulties, Sunny put in extra efforts to memorize his script before filming. Filming period dramas are especially difficult for Sunny, as the sentences are harder to decipher. Sunny will memorize his script, read them out loud and tape his words. He will listen over and over again until he understands the meaning and only then will he proceed with his acting.

Sunny Puts Aside Having Another Child

Sunny initially planned to have more children, but he decided to focus his time on helping Edgar instead. “In the past, I wanted to have more children. I have discarded the idea already. I am not young anymore. If I were to have another child, he would not even graduate when I reach 60. Besides, I never know what problems Edgar may be having. I always thought that if I have more children, they can accompany him. Now, I realize that I should just focus on resolving his issues.”

Sunny also revealed that his wife will become a full-time housewife in September. Sunny will return to TVB to resume his work and earn money for the family. However, Sunny mentioned that if given a chance, he would still prefer to take care of his son at home.

Sunny is Elated Over Son’s Improvements

Putting in efforts to help his son over the past year, Edgar finally showed a marked improvement. At his kindergarten graduation ceremony, Edgar is able to perform a recitation on a stage. Both Sunny and his wife were overjoyed over their son’s accomplishment. Recalling that his son could not even speak a proper sentence before, Sunny said, “Now he can recite already! He can also memorize the entire book. The progress is extremely satisfying and shocking!”