Synoposis of “House of Harmony and Vengeance” 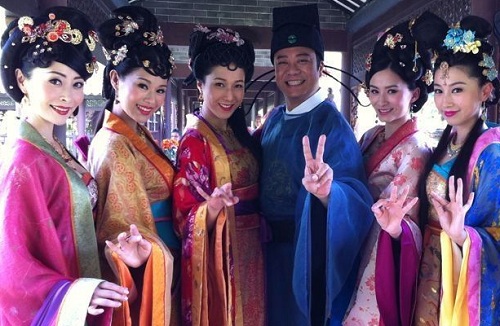 The Tang Dynasty was one of imperial China’s most prosperous periods, in which the arts flourished. The royal family particularly enjoyed a good dance and music performance. Thus, a prestigious competition was held to find talented individuals in the arts.  The winner will be granted a title of “Princess” by the Emperor. The instructor who procured the winning talent will be bestowed with imperial recognition and immense wealth.

A street muscian wanted for murder, Bobby Au Yeung, assumes the identity of an Imperial Music Bureau official (Evergreen Mak) to preserve his safety. Due to his partial amnesia, Evergreen forgot about his imperial post and instead, finds a job as a kitchen chef.

Enjoying his newfound wealth, Bobby was afraid that he will soon be found out to be an imposter and lose his life. One lie leads to another lie. Bobby sets out to break off his engagement with Evergreen’s betrothed bride, Linda Chung, afraid that his identity will otherwise be found out.

However, Linda decides to join the Imperial Music Bureau to train for the upcoming national music and dance competition in order to get closer to her fiance, whom she mistakens to be Bobby Au Yeung. Linda befriends Myolie Wu, a fellow dancer in the Imperial Music Bureau. The “sworn sisters” are also rivals in love and on court; will Bobby break the women’s friendship beyond repair?

Due to Bobby assuming Evergreen’s identity, a confusing love rectangle of unclear romantic relationships develop. Evergreen slowly regains his memories, realizing who he truly is and Bobby’s farce. The stakes rise as the national music and dance competition draws close, in which the foursome are eager to demonstrate their individual talents before the royal family…. Who will emerge as the final winner? Will they be able to all live in harmony and find happiness?

Watch Trailer of “House of Harmony and Vengeance”!

Jayne: Another spin on the classic “The Prince and the Pauper” theme. Fortunately, Bobby did not portray twins and did not pose as the Emperor. The theme sounds to be overdone, in which a rags-to-riches story results from the convenient plot device of amnesia and haphazard luck. Seriously, a lot of coincidence in the chain of events. This one may require a lot of suspension in belief from the audience.

Romantically, the leading men, Bobby and Evergreen, look more like “goofy” elder brothers than romantic partners for Myolie and Linda. Will audiences watch this and root for the “good sisters” to dump the men, hanging onto their friendship instead? No man should come between a woman’s BFF! 🙂

39 comments to Synoposis of “House of Harmony and Vengeance”