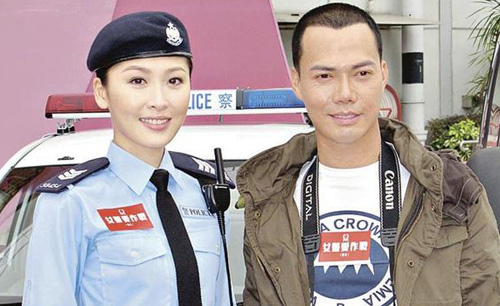 Niki Chow (周麗淇)  and Michael Tse (謝天華) recently completed filming TVB drama, Sergeant Tabloid 女警愛作戰 (formerly known as Policewoman Love Battlefield). While the drama’s television broadcast in Hong Kong has not been determined yet, the series will be aired on TVBJ in Australia and Astro On Demand in Malaysia on April 2nd. Allegedly, the drama will also be streamed on website, PPS.tv which targets mainland China users, on April 3rd.

Sergeant Tabloid revolved around the love and tribulations of Emergency Unit Sergeant Lui Fei Hap (Niki Chow), who was over thirty years old and experienced an unstable love life. When she thought that she had met a perfect man, he turned out to be a drug lord! The lovers’ relationship were sensationalized by tabloid reporter, Gordon Nam (Michael Tse).  This resulted in Fei Hap hating Gordon intensely. When Fei Hap falls in love with new police recruit and younger man, Wong Chi Chuen (Matthew Ko), Gordon sabotages the relationship.

Facing pressure from her superior, “Madam Kill” Sze To Kiu (Mandy Wong), Fei Hap’s professional and private life was about to be busted. In the name of love, Fei Hap was forced to strike back and face the battles head on….

It was not the first time that TVB dramas were enjoyed by overseas audiences prior to public broadcast in Hong Kong. It was understood that TVB and overseas broadcasting networks possessed confidence in Sergeant Tabloid, thus wished to air it prior to Hong Kong broadcast. Producer Nelson Cheung explained, “Perhaps overseas broadcasting networks have open slots in their programming schedules, thus they wished to air Sergeant Tabloid early. Overseas audience have expectations towards Hong Kong dramas. TVB felt that it was appropriate to release the drama overseas and did not select the choice haphazardly.”

Nelson Cheung felt confident in the quality of Sergeant Tabloid and was not concerned that the drama will become a TVB warehouse series, unable to be broadcast for years. Niki Chow expressed the same sentiment and saw the situation positively. Michael Tse noted, “It’s better than for the drama to become a warehouse series!” While Michael wished to see the drama broadcast sooner in Hong Kong, he was not upset towards TVB’s arrangements. The trio were not concerned that the early overseas broadcast will affect the ratings in Hong Kong.

Jayne: Sergeant Tabloid features many beautiful actresses as police officers, as well as William Chak and Matthew Ko in prominent supporting roles. This is the best looking police force I’ve seen in a TVB drama in years! With the Hong Kong police looking like a bunch of models, no wonder, tabloid reporter, Michael Tse is interested in chronicling their love lives!