“The Last Steep Ascent” to Air on September 17 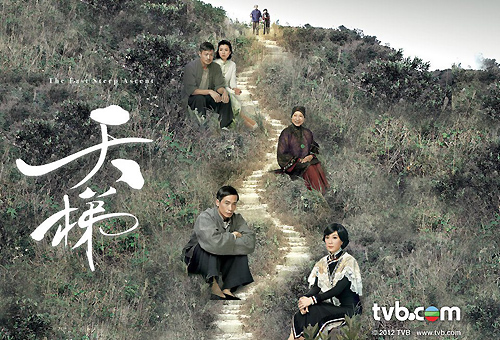 It was love at first sight for Lau Kok Gong when he met Tsui Chiu Ching, a widow who was 10 years his elder. To avoid the judgement and disapproval from their family and neighbors, they eloped and moved to a remote location in China. In fact, the location was so far removed that it was difficult for Tsui to get around. Lau decided to use his hands to carve a man-made staircase so it would be easier for his wife walk through the mountainous land. In took Lau 50 years to complete the staircase which stretched 6,000 steps. Their story was picked up by the media in 2002, and Lau passed away in 2007.

The story of Lau Kok Gong and his wife, Tsui Chiu Ching, was so moving and touching that it inspired the hit song Staircase by pop group, C AllStar, as well as TVB to create a series based loosely on their story.

The Last Steep Ascent <天梯> stars Moses Chan (陳豪), Maggie Cheung (張可頤), Aimee Chan (陳茵媺)  and Kenny Wong (黃德斌) and will premiere on September 17. Like all TVB series, the producers included a dramatic storyline in order to hook the audience.

Moses Chan plays the part of Miu Teen who first gets a glimpse of Koo Sun Yuet (Maggie Cheung) on her wedding day and falls in love. Sun Yuet marries Ho Sei Cheng (Cheung Kwok Keung 張國強), the rich owner of an herbal shop. It was not before long that Sun Yuet discovers that Sei Cheng was having an affair with his helper, Oi Tai (Aimee Chan). Sei Cheng passes away shortly after and Sun Yuet takes in Oi Tai when she finds out that Oi Tai is pregnant with her husband’s child.

During this time, Miu Teen is working in the herbal shop and secretly pining for Sun Yuet.

The drama takes a sharp turn when Sei Cheng’s family battles with Sun Yuet on the rights to the herbal shop. This is when Miu Teen steps in to confess his love for Sun Yuet and convinces her to move away with him to start a new life together. Miu then uses the next 50 years to handcarve a staircase for his beloved wife so she could get down the mountain more easily.

Due to budget cuts, TVB was not able to shoot on location in Chong Qing, so they recreated the staircase in Ma On Shan in Hong Kong with only 10 steps. A TVB representative explained, “We wanted to shoot on location, but we were unable to accommodate the artists’ schedule, so we did our best with our local resources.” When asked about adding the dramatic rich family battle storyline, the representative admitted, “That’s the only way to make the series more exciting!”

Since Maggie is no longer contracted with TVB, she will not be participating in any promotional activities, which is a disappointment for her fans because her character is portrayed positively in this series.

The roles also proved challenging for Moses and Maggie because they have to portray an aging couple throughout the series. In real life, 43-year old Maggie is only 2 years older than Moses. However in the series, her character is 10 years older than him!

On the other hand, Aimee has a chance to shine in The Last Steep Ascent because she plays the role of a third-party who will get raped. Aimee has many crying scenes which will be a test of her acting capability.

The highly-anticipated series, The Last Steep Ascent will broadcast in Hong Kong on Monday, September 17.