Tavia Yeung Admits Dating Him Law After Caught in His Lap 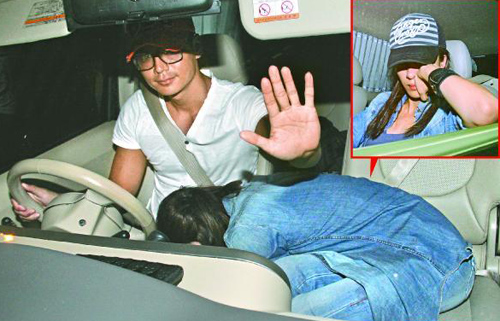 Apple Daily published shocking photos of Tavia Yeung’s (楊怡) face resting on Him Law’s (羅仲謙) lap yesterday. Reportedly caught in an awkward act, 33-year-old Tavia allegedly laid on 28-year-old Him’s lap for the duration of a 40-minute car ride. When the reporters pounced on the couple, Tavia refused to lift up her head. Tavia was photographed covering her face and appeared to be terribly embarrassed.

Him Picks Up Tavia After Dinner

The night before, Tavia was having dinner with her classmates from the TVB acting class. At around 9 PM, Tavia made a call outside the restaurant. After ten minutes, Him was spotted driving Tavia’s car and arrived at a street near the restaurant, appearing to wait for Tavia. Unaware that Him was waiting for Tavia, Tsui Wing (徐榮) and Matt Yeung (楊明) arranged Tavia to board a taxi at around 1.30 AM. Tavia alighted in a dark lane and quickly boarded Him’s car. The couple drove off after staying in the car for around ten minutes.

Him and Tavia Caught in Awkward Position

The car was sighted cruising at a slow speed of 30 kilometers per hour. After 40 minutes of traveling, Tavia was not spotted within the car. When the vehicle stopped at a garage lot near Tavia’s apartment, the paparazzi immediately flashed their cameras towards the car. They then realized that Tavia was all along present in the car and spotted her awkward submerged position.

Tavia’s head reportedly was tucked in between Him’s legs and refused to lift up her face. Looking shocked and irritated, Him tried to stop the reporters from taking the pictures. Tavia was snapped covering her face with hands and her face was red, looking very embarrassed.

Realizing that he could not shake away the paparazzi, Him drove the car and returned to Tavia’s apartment. Tavia had then already tidied herself and donned a cap. Apple Daily also claimed that Tavia had fluid on her lips and kept wiping her lips.

Tavia Yeung Lashed at the Paparazzi

At 2:07 AM today, Tavia lashed at the paparazzi in her Weibo blog, “As a public figure, we need to reflect on our code of conduct. However, as a reporter, do you have basic ethics? The article becomes remarkable after it is being written this way. Has the Hong Kong media degraded in such a manner? Why did you not report the truth and distort the facts? Where is your conscience?”

This afternoon, Tavia and Him clarified the incident at a press conference. The couple appeared to be relaxed and comfortable when facing the media. Tavia revealed that she specifically requested for Him to drive her home as she had too many drinks at the dinner.

“Before I went for the dinner, I already told Him, ‘Why don’t you pick me? I will not be able to drive when I drink. I hope that someone whom I trust will take me home.’ Our group drank a lot and everyone was drunk. When I walked out, he already told me that there were suspicious paparazzi present. I do not like to be in the spotlight and do not like people to tail me. I took a taxi with Meini Cheung (張美妮) and two other classmates. When I reached Meini’s place, I alighted and boarded Him’s car. I already vomited in the taxi and I can’t remember what happened after that.”

Tavia also revealed that she vomited after alighting the taxi and Him even had to hold her to get on the car. “As an artist, we do not wish to be photographed in a drunken state. As he is someone that I trust, I slept on his lap at that moment. There is absolutely no doubt about that, but the situation is not like what the fabricated news said. There is a need to explain why the photos came out this way. When the car drove at my apartment building, Him patted me and said, ‘Hey Hey, Ah Yi, wake up now. There are paparazzi.’ Since this [paparazzi] is a sensitive word to an artist, my first reaction is to cover my face and wear my cap.”

Tavia also disclosed that she vomited several times and thus her lips were wet. Due to the tabloid’s outrageous report, Tavia is considering taking legal action against the publication. Tavia further explained that she and Him were getting to know each other and would inform the public if their relationship advanced to the next stage.

Watch Tavia and Him’s Interview Over the Scandal