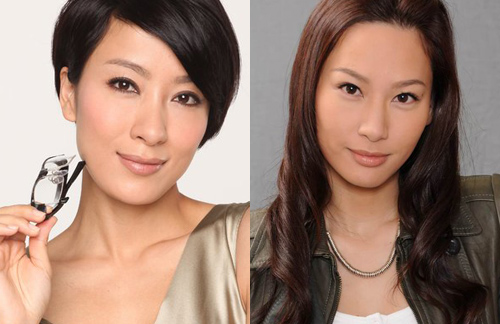 It’s that time of the year again. With the upcoming TVB Anniversary Awards, TVB is prepared to push out their best dramas to air in the Anniversary time slot! The company’s grand productions, including The Last Steep Aliment <天梯>, Highs and Lows <雷霆掃毒>, Silver Spoon, Sterling Shackles <名媛望族>, and The Confidant <大太監> will be the dramas that will air at the end of the year, bringing 2012 to a memorable close.

After famous TVB siu sangs and fadans, such as Charmaine Sheh (佘詩曼), Bowie Lam (林保怡), Jessica Hsuan (宣萱), and Joe Ma (馬德鐘) have all decided to leave the company earlier this year, TVB is now prompted to promote other actors and actresses to be the company’s next big stars. Highs and Lows’ Kate Tsui (徐子珊) and Silver Spoon, Sterling Shackles’ Tavia Yeung (楊怡) are currently the two top contenders for this year’s TV Queen title.

Earlier, popular stars such as Moses Chan (陳豪), Kenneth Ma (馬國明), Ruco Chan (陳展鵬), Myolie Wu (胡杏兒), Linda Chung (鍾嘉欣), Selena Li (李詩韻), Kate Tsui, and Tavia Yeung went to Singapore to attend the StarHub TVB Awards. Kate, whose fame rose to an all-time high after portraying “Paris Yiu” in crime drama Lives of Omission <潛行狙擊>, is said to be one of the strongest contenders for this year’s TV Queen. Kate’s Highs and Lows is currently slated for a late September time slot, in which she will star opposite Michael Miu (苗僑偉) and Raymond Lam (林峯).

Kate said, “My character in Highs and Lows is really challenging. I’m very satisfied with it. Hopefully the audience will enjoy it!” When asked if Highs and Lows’ favorable time slot will allow her to have a larger chance to win an award at the end of the year, Kate smiled, “It will! But I should not keep my hopes up so high.”

Tavia’s Silver Spoon, Sterling Shackles will also air at the end of the year. As for the imminent battle for TV Queen with her colleagues, Tavia laughed, “I don’t want to fight!”

Ex-couple, Myolie Wu and Bosco Wong (黃宗澤), each won a “My Favorite Character” award at Singapore’s StarHub TVB Awards last night. Bosco, however, was absent at the event. When asked about Bosco’s absence, Myolie said, “He is busy filming a drama right now, so he was unable to come.” Asked if she and Bosco were to appear at the same event together, Myolie assured, “If we have to, we will. We are still friends. It’s okay!”

Complete results of the Starhub TVB Awards Results can be found here.