Wu Jinyan (吴谨言) and Nie Yuan (聂远), stars of last year’s hit TV show Story of Yanxi Palace <延禧攻略>, reunited for the new Yu Zheng (于正) drama The Legend of Haolan <皓镧传>, and that piece alone made The Legend of Haolan one of the most highly anticipated television dramas of 2019.

But despite the show’s good viewership ratings, it failed to live up to the success of Yanxi Palace.

The drama is set during the final years of the Warring States Period of China, around the 200s BC. It tells the story of Li Haolan (Wu Jinyan), daughter of a Zhao State official, who was betrayed by family and purchased by Lü Buwei (Nie Yuan), a Wey State merchant, as a maid. They strike a partnership, and under Buwei’s influence, Haolan enters the Zhao Imperial Court to befriend Ying Yiren (Mao Zijun 茅子俊), a captive prince from the Qin State. A love triangle ensues, and Haolan eventually bears Yiren a son named Ying Zheng (Tong Mengshi 佟梦实), later known in history as Qin Shi Huang. 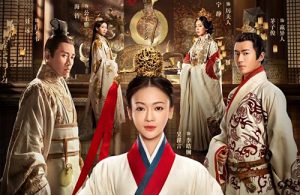 The complicated relationships between Haolan, Buwei, and Yiren recur throughout the series. Yiren eventually returns to his state and becomes its king, but his early death leads to Haolan becoming a pivotal political figure in helping her son become Qin’s king. Buwei also becomes a politician for Qin.

In the last episode, rumors spread throughout the state that Haolan and her eunuch Lao Ai (Zhu Jian 朱戬) are parents to two illegitimate children. Lao Ai then attempts to start a coup, only for it to be quashed by Ying Zheng. Haolan is then put under house arrest, and Buwei leaves the state, disappearing. Haolan’s and Buwei’s real endings were never shown on screen, but explained in broadcasted text. Many viewers were left dissatisfied by the quick and choppy ending.

This unfinished ending, however, was choppy and abrupt for a reason. Leaked photos showed that Wu Jinyan and Nie Yuan did film an ending for their characters—the two of them were donned in elderly makeup, riding a small boat together. An ending script was also leaked, which read that Haolan and Buwei had ultimately ended back together, and they leave their state to travel the lands.

But because this ending is not historically accurate, it was said that the production crew had to scrap it from the final product.