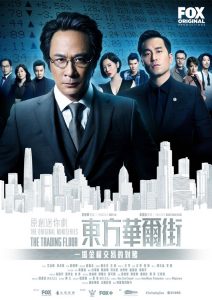 “It’s a hard topic to do,” said Andy when asked about the show’s plot. The Trading Floor, which has only five episodes, is set in the backdrop of Asia’s financial market in the past 20 years. “There aren’t much Hong Kong television dramas about this topic, so it’s something we must do.” Due to the drama’s intricate topic, pre-production for the drama took three years.

The Trading Floor is Francis Ng and Joseph Chan’s first collaboration. Joseph, best known for his performance in 2006’s Eternal Summer <盛夏光年>, admitted that he was anxious about their collaboration. “Francis and I did not know each other well, and he doesn’t talk much either. I felt a little distant from him.” The two quickly got close during filming, and Joseph said that is mainly due to the fact that Francis enjoys treating everyone to food.

On the topic of the show’s miniseries format, Francis said he enjoys the length. “Sometimes a movie is too short to tell an entire story, but in a five-episode series, you’ll be able to develop the plot and characters more. There also won’t be much room for filler dialogue.”

Asking if The Trading Floor has inspired Andy to do more work on television, the actor-producer said, “I did come from television, and the production value for television dramas nowadays are getting higher. I will definitely come back to do one sometime in the future.”

Andy also revealed that the team are already in works for a second season. “Kwai Lun-mei (桂綸鎂) will be starring in the second season. I didn’t drop any gimmicks to her; she really wanted to do it because of the story. The fact is, she’s playing a very good character. Good to the point that even I want to do it.”