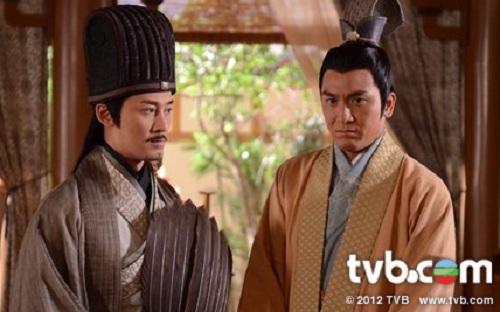 TVB drama, Three Kingdoms RPG <回到三国> is under fire again! Initial criticisms were aired over its poor script, visual effects and cast selection. Now, the series is blasted for its disturbing homosexual context, and even mocked that the drama’s title should be revised to Return to Gay Kingdom! Viewers complained about the affection scenes between the male characters: hands holding, face caressing, chest touching and even back rubbing all appear in the series! Viewers felt disgusted and found it totally unacceptable that their epic heroes from the Three Kingdoms era behave in such lewd manners!

Kenneth Ma and Raymond Lam Have a Gay Affair?

Netizens were quick to point out the scenes in Three Kingdoms RPG that reeked of gay elements. In the series, Kenneth Ma (马国明) plays time-traveler Sima Shun who overly idolizes and has great admiration for Raymond Lam’s (林峰) Zhuge Liang. On the wedding night of Zhuge Liang and his wife, played by Kaki Leung (梁嘉淇), Sima Shun grabbed onto the pillar, weeping and screeching, “You are my idol! Do not consummate with this ugly woman!”

When Liu Bei, played by Joseph Lee (李國麟) made Zhuge Liang his strategist, Sima Shun was heartbroken that Zhuge Liang did not select him as an advisor. Shun cried and lashed out at Zhuge Liang, “I regard you as a friend, and you treated me as your one night stand!”

In another bickering scene with Zhuge Liang, Sima Shun also described himself like a woman who had been dumped. Viewers sneered at the pair’s relationship akin to the cowboys in Brokeback Mountain! The bath scene of Liu Bei, Guan Yu (played by Jimmy Au 欧瑞伟) and Zhang Fei (played by Savio Tsang曾伟权) in episode 5 was heavily condemned. One netizen described the scene as atrocious, “The spring fountain appears with the sound of streaming water and soothing background music. I thought it is going to be a steamy bath scene of beautiful women….. and yes, there are three “beautiful women”! I was shocked and left speechless!”

This is not the first time TVB featured scenes of men bathing together. Such suggestive scenes had appeared in Relic of an Emissary <洪武三十二> and Twin of Brothers <大唐双龙传>.Viewers criticized these scenes as setting poor examples to children and indirectly suggesting homosexual context.

Many viewers were disgusted by the over exposure of bath scenes in Three Kingdoms RPG. One netizen even commented, “Why are the three epic heroes, Liu Bei, Guan Yu and Zhang Fei always taking steamy baths together?”