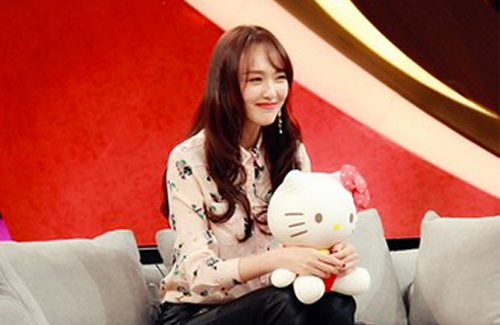 The Chinese talk show Close Distance <静距离> recently invited Tiffany as a guest star. The extremely private actress opened up about her relationship with Luo Jin, and revealed why she fell in love with the actor.

Tiffany told the show, “Luo Jin is very good to me. He’s a very warm-hearted person. He likes to put himself last, and always put the people he care about first. He gives me a sense of security. He’s unselfish, and that’s one of the reasons why I like him so much.” Tiffany added that her parents also approve of Luo Jin, saying with a smile, “I am so happy now!”

After months of keeping their relationship a secret, Tiffany and Luo Jin finally decided to go public on December 6, Tiffany’s birthday. Luo Jin posted a happy birthday message to Tiffany on Sina Weibo, to which she replied with a heart. Asking if this was a decision made by Luo Jin, Tiffany said, “It just felt like it was the right time!”

Tiffany’s last appearance on Close Distance was four years ago. The 33-year-old actress acknowledged her change since her last visit, and that her years of experience in the industry has given her a lot more confidence and positivity. “My emotional intelligence has increased. I’m filling myself with positive energy, and I will try not to think about the sad. I’ve become more of a problem solver.”