Tiffany Tang, Luo Jin’s “The Way We Were” Airs Finale 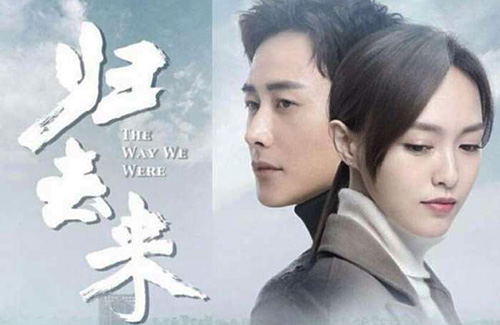 Real-life couple Tiffany Tang (唐嫣) and Luo Jin‘s (羅晉) drama, The Way We Were <歸去來>, just finished airing on June 10. Collaborating for the fifth time, Tiffany and Luo Jin portray exchange students in the drama. While the studio did not deliberately announce there will be a “big happy ending”, there was character growth and the drama portrayed the struggle between individual and social values realistically.

Although neither artistes are fluent in the English language, the director insisted on using Tiffany and Luo Jin’s original voices. Because the majority of scenes take place in the United States and consist of many English lines, Tiffany and Luo Jin hired English tutors two months prior to the start of filming to improve their pronunciation.

Stating that his English was not great, Luo Jin said in order to prepare for his role as a research student , he practiced with some crew members who were native speakers. Luo Jin would make recordings of the crew members reading the English lines so he could listen to them in his free time.

Although Tiffany and Luo Jin are ambitious individuals who strive to achieve their respective dreams, their relationship hits a major bump when their family past is brought into the story. Realizing the complexity of their fathers’ business relationship, Tiffany and Luo Jin’s values and beliefs soon part ways and their love for each other experiences many different challenges.

Director Liu Jiang (劉江) wanted to introduce viewers to the prevalence of foreign exchange students in recent years and the growth of these tough individuals who represent the fighting youths of today’s times. He expressed, “Our country is very developed and wealthy, and there an increasing amount of exchange students. The Way We Were displays the fighting spirits in today’s younger generation.”

TAGS: Luo Jin, The Way We Were, Tiffany Tang

2 comments to Tiffany Tang, Luo Jin’s “The Way We Were” Airs Finale