Tiffany Tang on Wallace Huo: “We Are Rather Fitting” 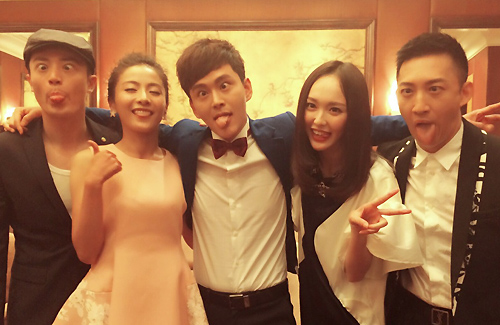 At a press conference for the romantic comedy drama, Perfect Couple <金玉良緣>, which will air on April 21 on Jiangsu Satellite TV, leads Wallace Huo (霍建華) and Tiffany Tang (唐嫣) were asked about their rumored off-screen romance. Tiffany teasingly responded, “We are rather fitting.”

Ever since their collaboration in Chinese Paladin 3 <仙劍奇俠傳3> five years ago, Wallace and Tiffany have become a popular on-screen couple in the eyes of viewers. When it was announced that they would work together for Perfect Couple, rumors began spreading about their real-life relationship, especially since Tiffany was then recovering from a hostile breakup with Taiwanese actor Roy Chiu (邱澤).

When asked about the relationship rumors, Tiffany smiled and said, “We are rather fitting.” After a round of laughter from the audience, Wallace cut in with, “She means that we are fitting in terms of gender,” leading to more laughs.

“Our on-screen partnership will show a façade to people,” Wallace went on, “but we’re actually very good friends. I hope you won’t misunderstand. We are very satisfied with the current state of affairs, and we haven’t thought about deliberately changing it.”

Wallace also shared that Tiffany is such a good friend that she agreed to act in Perfect Couple after just one phone call from him. Since this is his first time producing a television series, he had to turn to a few of his friends inside the industry for help.

The effort seems to have been worth it, however, as the press conference audience enjoyed the light-hearted and humorous elements in the featured video preview. The audience’s laughter was an important sign of approval for Wallace, who revealed that Perfect Couple was meant to provide viewers with a getaway from the heavy pressures of modern life.

2 comments to Tiffany Tang on Wallace Huo: “We Are Rather Fitting”