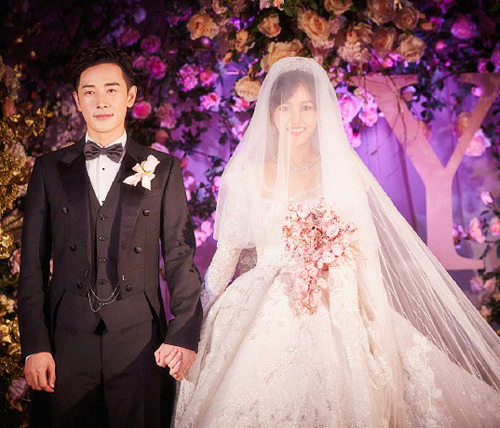 The wedding declarations were the most touching for the bride.

Mainland Chinese actress Tiffany Tang (唐嫣) had secretly kept her Vienna wedding to Luo Jin (羅晉), her boyfriend of two years well under wraps before announcing it only on October 28 on Weibo. Attending an event after the wedding, she revealed more details about the most unforgettable moments on her big day.

Tiffany coyly addressed her husband as her “other half” and revealed that the most touching part of the wedding was when the couple spoke their vows as man and wife. “This is the first time both of us exchanged words we’ve never spoken before to each other face-to-face. For me, those particular moments were the most touching, and [also because] these vows last for a lifetime!” Tiffany shared, saying the couple’s mutual trust in their new roles made it all the more special.

According to reports, the couple had set strict rules, such as forbidding wedding guests from bringing their mobile phones, giving each person a polaroid camera instead. Guests who were Tiffany’s good friends and family members were also required to match their outfits with bracelets. Actor Oscar Sun (孫堅), who was one of the groomsmen at the wedding, shared the couple’s saccharine-sweet wedding vows – Luo Jin had said to his bride, “I await your advice for the rest of my life,” while Tiffany sweetly declared, “I’ve married my true love.”