“Tsui Yee” in Forensic Heroes IV <法證先鋒IV> was a role originally tailor made for Jacqueline Wong (黃心穎). The character’s mannerisms, vocal tone, and personality were all written with Jacqueline in mind.

But all of that time and effort went down the drain when the 31-year-old actress was caught in a cheating scandal with singer Andy Hui (許志安) last year. With Jacqueline’s image down the drain, TVB had to come up with a quick plan to ensure that Forensic Heroes IV, a show that was originally meant to be 2019’s anniversary drama, would get eventual air-time.

Roxanne Tong (湯洛雯) was called in last-minute for the reshoots, replacing Jacqueline as Tsui Yee. She was only given one month to redo all the scenes that took Jacqueline five months to complete. And Roxanne’s efforts can be seen. The actress has been getting massive support for her performance as Tsui Yee, receiving critical acclaim.

Roxanne definitly showed that she did her research before taking on the role of Tsui Yee. From her posture to even vocal tone, Roxanne clearly imitated Jacqueline to the T.

The editing team did a great job replacing Jacqueline’s scenes with Roxanne’s, but sharp-eyed viewers were able to notice that the editors did not completely edit Jacqueline away. Certain scenes that showed only Jacqueline’s back were kept. Roxanne only needed to fill in for the close-up shots. A recent episode featuring Tsui Yee meeting with a newspaper editor played by Jerry Ku (古明華) showed the character wearing heels, but in the following scene, Tsui Yee was seen wearing flats. The scene with Tsui Yee wearing heels was the original shot featuring Jacqueline, and the next scene was a reshoot with Roxanne. 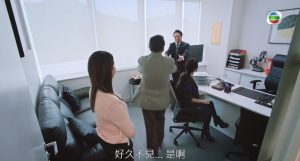 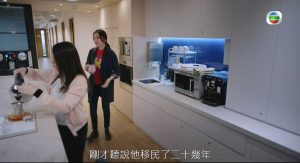