Tracy Chu Hopes for Smooth Transition as an Actress 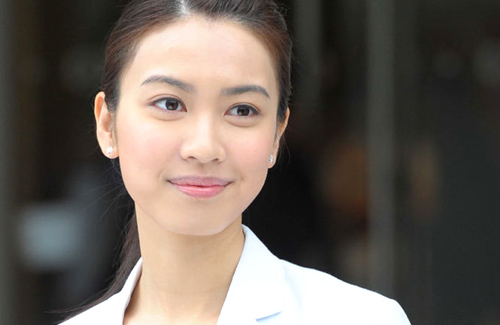 Tracy Chu (朱千雪) has had a successful start since winning second runner-up at the 2012 Miss Hong Kong Pageant. Although she was placed behind Carat Cheung (張名雅) and Jacqueline Wong (黃心穎) that night, Tracy was the first of the three women to appear in TVB dramas. After being cast in The Hippocratic Crush 2 <On Call 36小時II>, her workload continued to increase with movie and drama projects. Tracy is now ready to drop her beauty pageant image behind to reveal a new self. “I hope to make a successful transition from a Miss Hong Kong into an artist.”

TVB series aside, Tracy takes a special interest in movies and recently took up a films project with Nick Cheung (張家輝) and Jacky Cheung (張學友) in The Grand Canyon <大峽谷> (tentative title). The beauty queen then complimented Nick and Jacky for being gentlemen like and looking out for her.

Thanks Lawrence Ng as Her Mentor

Even Tracy was surprised about her quick promotion. She did not expect receiving such a major role in The Hippocratic Crush 2, nor the fact that she would star alongside veteran actor, Lawrence Ng (吳啟華). Tracy expressed, “I always thought I would portray a cameo role with one or two scenes. When I heard the story from the producer, I realized my character has a name.”

In the medical drama, Tracy portrays a stubborn and determined doctor who eventually has a romantic storyline with Lawrence. As Tracy is still new to the entertainment industry, she expressed her gratitude towards Lawrence for being a great mentor. Earlier, it was reported that she was scolded for her frequent retakes and poor acting abilities, however, like her character in the series, Tracy exhibited hardworking ethics and received valuable tips from Lawrence.

Reception has been mediocre for Tracy’s performance in The Hippocratic Crush 2. Some viewers criticized her poor acting abilities, while others believed it was a great first attempt. Nonetheless, Tracy admitted having felt very nervous and helpless on her first day of filming. “My heart was beating really quickly the first day I arrived on set. I didn’t know anyone there. The producer and director told me I could ask them anything I needed to know, but I had no clue what to ask,” she revealed.

While Tracy easily cries buckets of tears when watching movies at home, she finds crying scenes to be extremely difficult to act out on the spot. She recalled the first scene she filmed for The Hippocratic Crush 2, in which her character had to cry on the streets. Prior to that day, Tracy had practiced by herself several times. Since she cried successfully at home, she thought everything would be fine. However, Tracy realized there was a big difference when cameras were actually pointed towards her. She explained, “No matter what I did, no tears came out. I was really afraid that I was dragging everyone behind. Fortunately, Lawrence taught me how to build up my emotions. In the end, the director approved the shot.”

Tracy immigrated to Vancouver, Canada, with her family when she was 8 years old. As the eldest of three daughters, she always listened to her parents and acted as a role model to her younger sisters. After graduating from Simon Fraser University with a degree in Business and Communications, Tracy returned to Hong Kong alone for job opportunities. After working in a marketing office for two years, she decided to join the Miss Hong pageant to open perspectives.

Along the way, she received full support from family and friends. But after the pageant ended, Tracy felt like she cannot introduce herself as a Miss Hong Kong her whole life. When she did attempt to detach her name from the pageant, she remained unknown to others. Tracy shared, “At an earlier function, someone asked who I am, and I said, ‘Tracy Chu.’ The person then replied coldly, ‘Oh…I don’t know [the name]!’ and walked away. I wasn’t really unhappy, since I know I’m still new to the industry, but I will do my best and use my own abilities to let others know my name is Tracy Chu.”

This article is written by Shirley and Su for JayneStars.com.